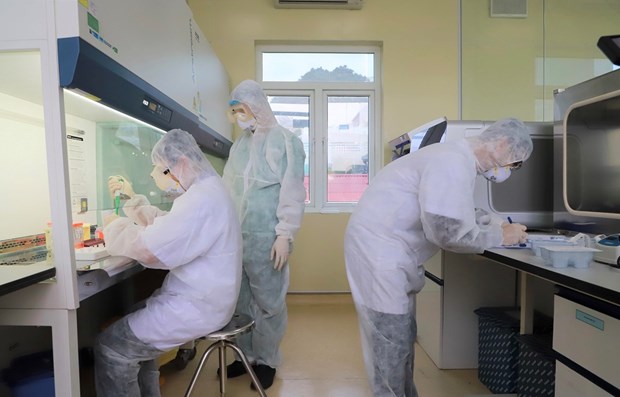 In a testing laboratory (Photo: VNA)

Hanoi (VNA) – The Ministry of Health on March 26 evening announced
five new cases that tested positive for the novel coronavirus SARS-CoV-2,
raising the total number in the country to 153.

Two out of the five patients returned from abroad and entered Vietnam from March 21-23 and have been quarantined since their entry. The remainders were infected with the virus from patients inside the country.

The 149th patient is a 40-year-old Vietnamese man who worked as a freelancer in Hessen state of Germany. He arrived at Van Don Airport in northern Quang Ninh province on flight VN36 (seat number 55C) on March 23 along with his mother (seat number 55A). He tested negative for SARS-CoV-2 on March 25.

The man is treated at the Hospital No.2 in Quang Ninh’s Ha Long city.

The 150th patient is a 55-year-old Vietnamese man. On March 13, he and his wife flew from the US, transited in Taiwan (China) and boarded flight BR395 of EVA Air (seat numbers 2D and 2K) back to Vietnam. They arrived at Tan Son Nhat International Airport in Ho Chi Minh City on the same day.

He had contact with many people after his entry. He has been quarantined at Can Gio district’s COVID-19 treatment hospital since March 18.

The 151st patient is a 45-year-old Brazilian woman, who is residing in HCM City’s district 2, and working at two branches of her footwear company in Dong Nai province and HCM City.
She had close contact with the 124th patient. She also visited restaurants and supermarkets in HCM City and Dong Nai.

The patient is now treated at a quarantine area in HCM City’s Cu Chi district.

The 152nd patient is a Vietnamese woman, 27, residing in HCM City’s Tan Phu district. She is an older sister of the 127th patient, who worked as a waiter at Buddha Bar.

She has been under quarantine since March 23 at Can Gio district’s COVID-19 treatment hospital.

She visited her relatives in Australia and returned Vietnam on March 21 on flight VN772 to the Tan Son Nhat airport. Upon her arrival, she was quarantined along with the 143rd patient and two other people in the same room at the dormitory of Vietnam National University-HCM City.

After the 143rd patient was confirmed to contract the disease, she and the two remainders were transferred to the acute respiratory disease hospital in Cu Chi district for quarantine and testing on March 23./.