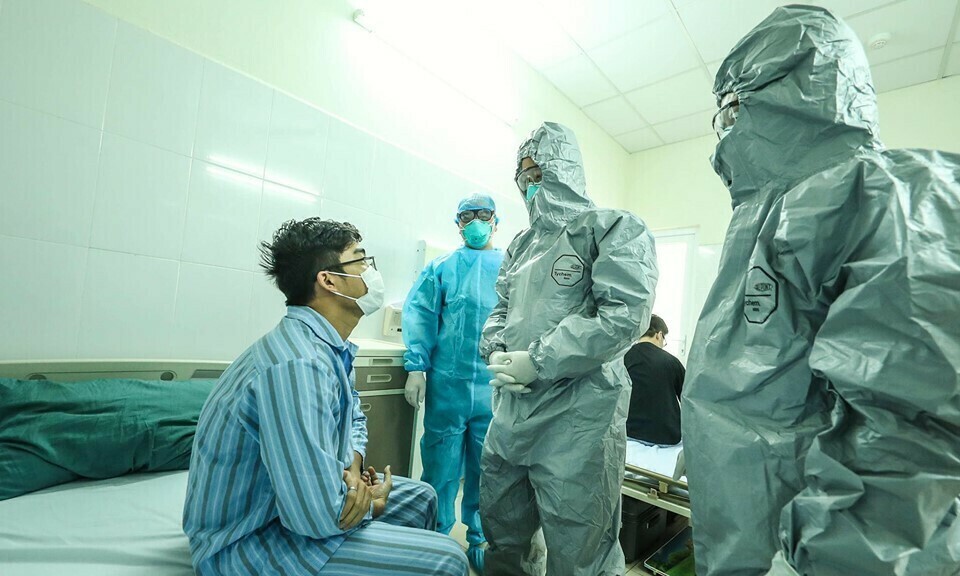 “Patient 142” is a 26-year-old man residing at An Phu Tay resident area in Ho Chi Minh City’s Binh Chanh District. He touched down in the city on March 10 on flight BR395 of Eva Air. After entering Vietnam, he had visited Binh Dan hospital in District 3, the U.S. Consulate General and met with several officials in charge of temporary residency in Tan Uc Commune of Binh Chanh. He tested positive on March 23 and is undergoing treatment at a field hospital in Can Gio District

“Patient 143” is a 58-year-old South African expat living in Tan Son Nhi Ward, Tan Phu District, HCMC. She returned from the U.S. on Eva Air’s BR395 flight taking off in Seattle and transiting in Taiwan. After entering the city on March 21, she was sent to a quarantine camp at a university dormitory in Thu Duc District. She directly contacted a family member who had Covid-19 before flying back to Vietnam. On March 22, she showed Covid-19 symptoms of fever, cough and shortness of breath before testing positive. She is now treated in Cu Chi.

“Patient 144” is a man, 22, in Phu Nhuan District. He flew from the U.K. to HCMC on Vietnam Airlines’ flight VN50 on March 22. He was put into quarantine in the southern province of Tra Vinh upon arrival.

“Patient 145”, is a 34-year-old man residing in Son Ky District, Tan Phu District. He works as a manicurist in the U.S. He returned to Vietnam on flight VN50 that touched down in Can Tho City in southern Vietnam on March 22 and was sent to a military school in the city for quarantine. Later he developed a cough and was taken to Can Tho Tuberculosis and Lung Diseases Hospital, where he tested positive and is now receiving treatment.

“Patient 146” is a 17-year-old woman in Nghi Thiet Commune, Nghi Loc District of the central province of Nghe An. She returned to Vietnam from Thailand on March 20 and had previously come into close contact with a Covid-19 patient in the central city of Da Nang. After entering Vietnam, she was sent to isolation at a camp in Ha Tinh Province that neighbors Nghe An and tested positive. Now she is staying at Ha Tinh’s Cau Treo General Hospital.

“Patient 147” is a man, 19, in Yen Hoa Commune, Cau Giay District of Hanoi. He is a student returning from the U.K. on flight VN54 on March 21. He was quarantined right after his entry and tested positive shortly after that. He has been admitted to the National Hospital for Tropical Diseases in Dong Anh District.

“Patient 148” is a French man, 58, who was staying O Cho Dua Ward, Dong Da District of Hanoi after coming to the city for a tour on March 12 on flight VN18. Since his arrival until March 19, he had been to many tourist sites of Hanoi. On March 19, he was tested and put into quarantine at home. His test came out as positive on March 24

By far, the nation has had 148 infections confirmed, including 131 active cases recorded since March 6.

Many of active cases are Vietnamese nationals retuning from Europe and the U.S. and foreigners visiting from the same regions. Starting March 22, in an unprecedented move, Vietnam has suspended entry for all foreign nationals, including those of Vietnamese origin and family members with visa waivers.

The Covid-19 pandemic has killed moret han 19,700 people globally as it spread to 198 countries and territories.