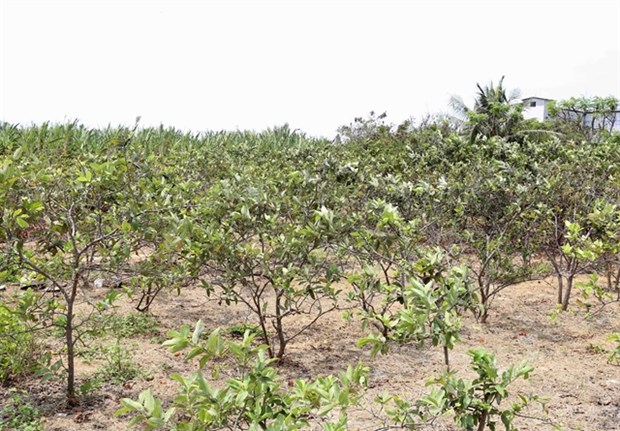 Ben Tre (VNA) – Saltwater intrusion
has affected many fruit growing areas in the Mekong Delta as local farmers
struggle to secure irrigation water for their orchards.

The Mekong Delta, the country’s largest fruit producer, is facing severe saltwater intrusion in the ongoing dry season, which has exceeded the record set in the 2015- 2016 dry season.

In Cho Lach district, which has the largest fruit growing area in Ben Tre province, saltwater is threatening 20,000ha of fruits and 1,300ha of plant seedlings, flowers and ornamental plants, according to the district’s Bureau of Agriculture and Rural Development.

They also have been using barges, boats and vehicles to transport irrigation from other places to the district.

In Tien Giang, which is the delta’s largest fruit growing province, more than 36,000ha of fruits, including 12,000ha of durian in Cai Be, Cai Lay and Chau Thanh districts and Cai Lay township, are facing water shortage, according to the provincial Department of Agriculture and Rural Development.

Many farmers in Tien Giang have to buy water at a high price to irrigate orchards, mostly for durian which has high economic value.

To help durian farmers, the provincial People’s Committee has hired barges to transport irrigation water. The water supply will last until the end of next month.

The district has mobilised vehicles to transport water to fruit orchards.

Before the 2019- 2020 dry season, authorities and farmers in the delta carried out measures to mitigate the impact of saltwater intrusion to rice, fruits and other crops, including changing rice farming schedules, building irrigation works and storing fresh water.

Under the instruction of authorities, most farmers in the delta sowed the 2019-2020 winter-spring rice crop one month early.

However, because of severe saltwater intrusion, many fruit growing areas in the delta have still been affected.

The ongoing saltwater intrusion could affect 130,000ha of the delta 300,000ha of fruits in the 2019 – 20 dry season, according to the Ministry of Agriculture and Rural Development.

Water with a salinity of 4 grammes per litre is expected to enter 45 – 95 km deep into the delta’s main rivers like Vam Co Dong, Vam Co Tay, Ham Luong, Co Chien, Hau and Cai Lon rivers between March 16 – 20, according to the National Centre for Hydro-Meteorology Forecasting.

Vo Huu Thoai, Deputy Director of the Southern Horticultural Research Institute, said each type of fruit has a different salt tolerance and farmers should be careful in using irrigation water on their fruit trees./.