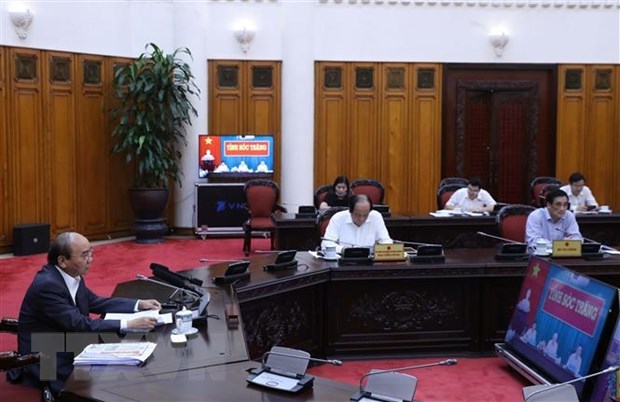 At the meeting (Photo: VNA)
Hanoi (VNA) – Prime Minister Nguyen Xuan Phuc
discussed with leaders of the Mekong Delta province of Soc Trang about measures
to tackle saltwater intrusion in the region during a teleconference on March
25.

Speaking at the event, PM Phuc lauded the provincial authorities for effectively fighting COVID-19 and saltwater intrusion, adding that though being one of the provinces hardest hit by salt intrusion, Soc Trang suffers less damage than others.

He also hailed the province for its high economic growth last year and being one of the five localities with the highest rice output.

The leader also informed that the upcoming national conference will look into dealing with difficulties in production and trade, public capital disbursement, social welfare amid unemployment, and social safety and order.

He suggested that Soc Trang should seek necessary advantages, especially in agro-forestry-fisheries and services in tandem with improving business environment.

The PM noted that the province needs to pool all possible resources to fight COVID-19 – the top important task, followed by socio-economic development.

Towards the goal of turning Soc Trang into a prosperous province in the Mekong Delta, he suggested focusing on fighting saltwater intrusion, accelerating public capital disbursement and encouraging innovation and start-ups.

He also called on the province to triple the number of businesses to nearly 8,000 by 2021.

Last year, Soc Trang met and surpassed all 20 socio-economic targets, and its economy grew by 7.3 percent, a record since 2015./.