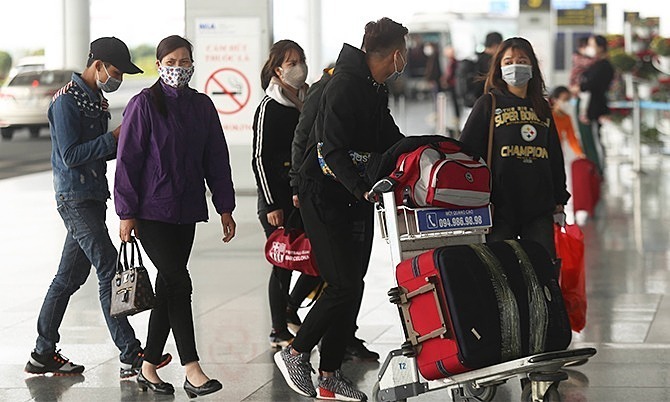 Capital city authorities acted Wednesday to disembark a woman fleeing quarantine to the U.K. and fined her VND10 million ($423).

The 25-year-old woman, whose name has not been revealed, is a resident of Long Bien District who had direct contact with a Covid-19 patient.

A student in the U.K., she had been quarantined at home until Friday. However, on Wednesday, local authorities found her leaving home and going to the Noi Bai Airport to board a plane of an unnamed foreign airline bound for the U.K.

Hanoi Chairman Nguyen Duc Chung said that as soon as the woman left home, it was discovered by the city’s surveillance system. Authorities in Long Bien District then cooperated with security officers at the airport to bring the woman back from the airplane to continue her quarantine.

Many Vietnamese online users disagreed with what they said was the overly lenient punishment meted out to the student, given the risks that she exposed the community to. They said the punishment was not heavy enough to deter such behavior.

Hanoi currently has the highest number of infections in the country at 54, followed by HCMC (34).

Hoang Duc Hanh, deputy director of Hanoi’s Department of Health, said 9,000 people are being isolated at home and the capital city has arranged 15 centralized quarantine facilities.

Chung had earlier asked all Hanoi residents to confine themselves to their homes until April 5, saying the country was entering a critical stage in the Covid-19 fight.

So far, the nation has confirmed 148 infections, including 131 active cases.

The earlier 17 cases were discharged after treatment. Of the current cases, 15 have tested negative at least once.

Most of the active cases are Vietnamese nationals retuning from Europe and the U.S. or foreigners visiting from the same regions.

The Covid-19 pandemic has killed more than 21,000 people as it spread to 198 countries and territories so far.