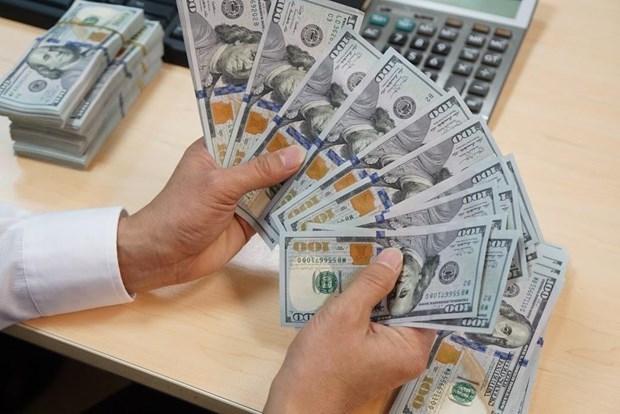 Hanoi (VNS/VNA) – The
US dollar on March 25 depreciated against the Vietnamese dong after the
State Bank of Vietnam (SBV) sold the greenback on the cheap to stabilise
the local foreign exchange market.

On March 24, the SBV’s Operation Centre adjusted its dollar rate sold to commercial banks down by 258 VND to 23,650 VND per dollar amid the rapid rise in exchange rates while keeping the buying rate unchanged at 23,175 VND.

The SBV’s selling rate was some 100 VND lower than that listed at commercial banks and some 250 VND lower compared with the rate quoted on the unofficial market.

Following the central bank’s move, the dollar listed at most commercial banks dropped remarkably on March 25.

Pham Thanh Ha, head of the SBV’s Monetary Policy Department, on March 24 said the central bank was willing to sell the US dollar in large volumes at a price cheaper than the market to stabilise the local foreign currency market, which has been recently hit by a rise in the global market and impacts of the COVID-19 outbreak.

According to Ha, the SBV continued to buy the dollar to increase the country’s foreign reserves in January thanks to favourable conditions in the global and domestic markets.

The dollar has risen significantly in the domestic market recently, Ha said, explaining the increase was due to market sentiment in the wake of the pandemic and the depreciation of currencies in many of Vietnam’s major trade markets.

Despite the rise, the greenback’s liquidity in the domestic market had been basically stable and customers’ legitimate foreign currency demands had been promptly met, Ha said.

With a net purchase of $20 billion in 2019, the central bank increased the nation’s foreign reserves to nearly 80 billion USD last year, six times higher than in 2011.

Experts believed that ample foreign currency reserves would help the SBV regulate the exchange rate and take measures to stabilise the forex market if necessary this year.

Ha said the central bank would continue to closely watch the foreign currency market to make suitable adjustments when necessary./.