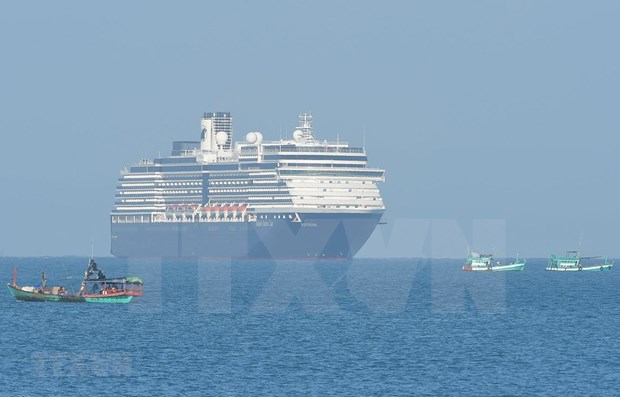 MS Westerdam cruise ship, feared to be carrying passengers infected with the new coronavirus, sails the seas for several days after being refused entry by a number of countries. (Photo: AFP/VNA)

Phnom Penh (VNA)
– World Health Organisation (WHO) chief Tedros
Adhanom Ghebreyesus has thanked
Cambodia for allowing the Westerdam cruise ship to dock despite fears that the ship may be carrying
passengers infected with the new coronavirus.

The MS Westerdam, run by the US-based Holland America Line with 1,455 passengers and 802 crew members on board, had been forced to sail the seas for several days after being refused entry by a number of countries.

In his letter ahead of the ship’s arrival at the southern port of Sihanoukville, Ghebreyesus praised the Cambodian government for the gesture, saying this is an example of international solidarity. He particularly extended his gratitude to Cambodian Prime Minister Samdech Techo Hun Sen.

Cambodia wants to contribute to humanitarian affairs in times of emergency, Hun Sen told Fresh News a day earlier. The motives of the action are to eliminate fear and discrimination, the PM said.

US Ambassador to Cambodia W. Patrick Murphy tweeted later the same day that he greatly appreciated Cambodia’s assistance, as there are US citizens on the ship.

Preah Sihanouk provincial police chief Major General Chuon Narin said on February 13 that a group had boarded the ship to conduct medical checks for the 2,200 passengers and crew members.

He said 20 of the passengers who are suspected to be infected with the virus will have their blood samples tested at the Pasteur Institute./.