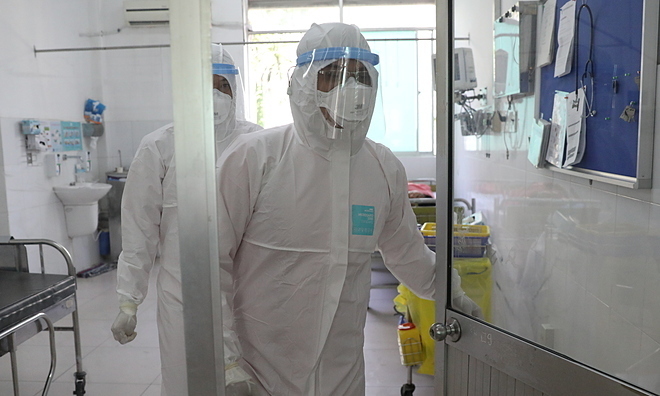 Associate Professor Luong Ngoc Khue, head of the medical examination and management department under the Ministry of Health, said the baby’s health is currently stable.

The little girl is conscious, has no fever and coughs only a little. She has no runny nose and no difficulty breathing. Her health seems to be back to normal, Khue said.

“If the next test result also returns negative, the baby could be considered for discharge,” Khue said.

The girl was sent to Vietnam National Children’s Hospital on February 12 after testing positive for the Covid-19. She contracted the disease from her grandmother who got infected from her 23-year-old cousin Nguyen Thi Du, one of eight workers who visited Wuhan for work training last November and returned on January 17.

On January 28, the infant was taken to her grandmother’s house in Vinh Phuc’s Binh Xuyen District.

After the grandmother tested positive, the provincial center for disease control quarantined the baby and her mother since they had had close contact with the patient.

On February 6, the child developed a cough, but no fever. A blood test subsequently showed she had caught the virus, though her mother tested negative.

Among 16 cases of infection across Vietnam, seven were released from hospital after doctors declared them free of the virus.

Vinh Phuc Province, around 40 kilometers from Hanoi, was hit hardest with 11 cases reported.

Medical experts have confirmed there is no specific medicine or vaccine to treat the novel coronavirus, though Vietnam has enough capacity, experience and confidence to treat patients.

The WHO said Saturday Vietnam has responded well to the epidemic from the very outset, preventing its spread.