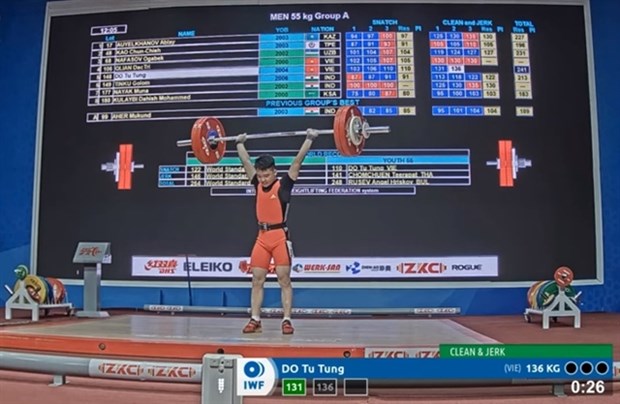 The Vietnamese lifter competed in the men’s 55kg category in the youth and junior events the same on February 15.

In the snatch event, Tung lifted 110kg to top the podium. His result was a world junior record beating the previous mark set by Italy’s Massidda Sergio last October by 1kg.

Nguyen Thi Thuy Tien , 19, took three golds in the women’s junior 55kg category with 79kg in the snatch and 105kg in the clean & jerk.

Nguyen Thi Thu Hoai, 16, won four titles in the women’s 45kg discipline in the youth and junior events with her 86kg lift in the clean & jerk and 149kg in total.

Vietnam sent a team of nine lifters to Tashkent with nearly 200 other competitors competing in 24 categories.

The tournament will end on February 19, and is a qualifier for the Tokyo Olympics./.