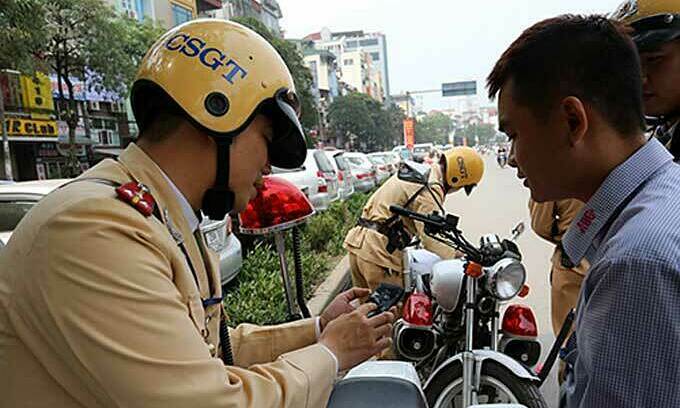 The fines can be paid at dichvucong.gov.vn.

“The five localities have been chosen because they account for half of the nation’s traffic sanctions,” said Colonel Vuong Ngoc Bac, deputy chief of staff at the Traffic Police General Department under the Ministry of Public Security.

The department will update information of violators on its database and link it with the national public services portal.

People can track their names and violations and follow the steps shown on the portal to pay the fines. They can also register their addresses if they want to get their driving licenses and vehicle registration certificates back by post.

Following the pilot project, the department will complete its data infrastructure for applying the process nationwide from June.

Ngo Hai Phan, head of the Administrative Procedure Control Agency (APCA) under the Government Office, said at a meeting in Hanoi last October that on-the-spot and offline payment procedures were not only time-consuming and strenuous, they also allowed corruption and “negative experiences.”

It is not uncommon that traffic police receive bribes from citizens violating the law, he said, adding that the bribery was either initiated by the violator looking to avoid paying a bigger fine or have their documents or vehicles confiscated, or by the police officers willing to let violators off for a price.

This agreement has allowed residents to pay fines and collect confiscated documents back at post offices nearest to their homes or officers. However, they still have to go to the post office in person to do this.

The national public services portal, inaugurated last December, has been described by Prime Minister Nguyen Xuan Phuc as an e-document exchange platform facilitating quicker and safer delivery of official documents. The portal will be managed by the Government Office.

Apart from collecting traffic violation fines, the portal will also provide other services for all 63 cities and provinces, including: re-registering driving license and medical insurance schemes (on expiry or if they are damaged or lost); electricity supply related services; and obtaining certificates of origin for products.