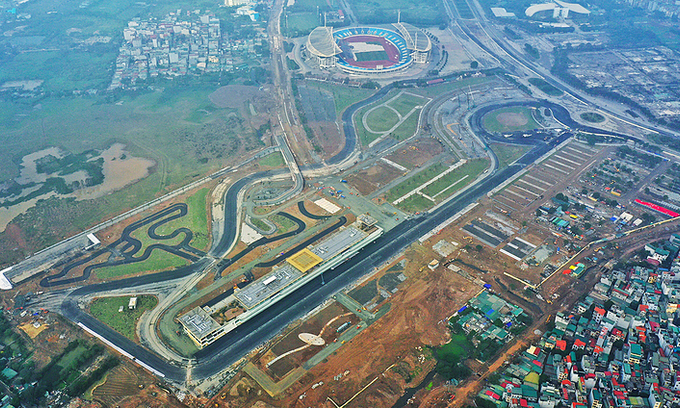 A drone shot of Hanoi Formula One circuit under construction. Photo by VnExpress/Ngoc Thanh.

A top Formula One official is hopeful the inaugural Vietnam Grand Prix would go ahead on schedule in April despite the coronavirus outbreak.

“For Vietnam, all the feedback we are getting is rather like the U.K. There have been some cases but not a level that would concern us,” Ross Brawn, Formula One managing director of motorsports and technical director, said at an event in Canada on Wednesday.

“The advice we are getting is that it can go ahead there,” Brawn said, as cited by Reuters.

Brawn made it clear his British-based team would not force any employee to go to Hanoi, where the race is to be held.

“Vietnam has not been raised yet as a potential issue. But obviously it is very nearby (China); so we are going to monitor the situation. We would never do anything that puts our people at risk and I don’t believe Formula One would.”

An F1 spokesman told BBC that “we can only confirm that Vietnam is on the schedule” but it depends on the epidemic status in the country.

The event is scheduled to be held from April 3 to 5 at the brand-new Hanoi circuit, about 161 km from the China border.

It was announced on Wednesday that the Chinese Grand Prix, scheduled for April 19, has been postponed.

Earlier this week the Vietnam Grand Prix Corporation said the Porsche Carrera Cup Asia (PCCA) would be a support race at the Hanoi grand prix.

The PCCA will be the second supporting race after the Thailand Super Series (TSS).

The PCCA will take place on the same three days as the F1 race with test races on the first day, classification race on the second and the main race on the last day.

The construction of the 5.607 km circuit began in March last year and is expected to be completed next month.