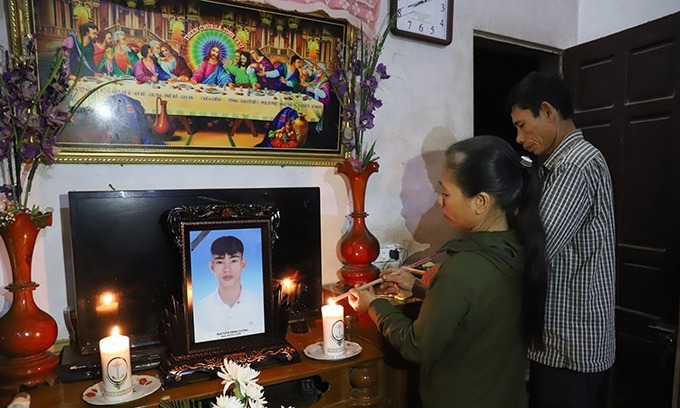 Parents of Nguyen Dinh Luong, one of the victims in the U.K. truck tragedy, burn incense at his altar at their home in Ha Tinh Province, central Vietnam, November 7, 2019. Photo by VnExpress/Duc Hung.

The group of 12 British officers and staff are in Vietnam to investigate the deaths of 39 Vietnamese found in a container truck last October.

They will be in the country until the end of February and are scheduled to meet the families of victims killed in the refrigerated container truck, police in Essex, where the truck was found, stated Wednesday.

The team are working closely with the British Embassy and National Crime Agency’s (NCA) international liaison staff in Hanoi, and Foreign and Commonwealth Office, who have assisted with trip arrangements.

Specialist officers from the NCA and those from Vietnam’s Ministry of Public Security will be joining the investigation.

The move came after Essex police wrapped up post-mortems, revealing the provisional cause of death was a combination of hypoxia and hyperthermia in an enclosed space.

Last November, authorities released the identities of all 39 Vietnamese killed. The two youngest boys were 15 years old and oldest man was 44. Their remains were brought home later that month.

Twenty one of the victims were from Nghe An Province in north central Vietnam, 10 from neighboring Ha Tinh, and the rest from nearby Quang Binh and Thua Thien-Hue Provinces, as well as Hai Duong Province and Hai Phong City in the north.