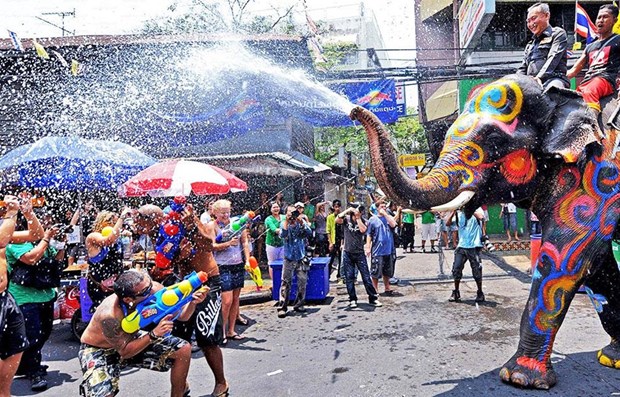 Bangkok (VNA) – The Thai Government is considering the extension
of the traditional Songkran New Year Festival in April to stimulate the economy
which is facing numerous difficulties.

According to a government source, there is a proposal to extend the Songkran holiday by two days to nine days from April 13-19.

Relevant agencies are expected to submit the proposal at a meeting discussing economic stimulus measures.

Creating a shopping atmosphere is hoped to help the economy which faces many economic risk factors such as the outbreak of the new coronavirus, drought, delay in implementing the budget, and the Korat mass shooting in Nakhon Ratchasima, which have had a huge impact on businesses and the tourism industry.

On February 12, Thai Deputy Prime Minister Somkid Jatusripitak also mentioned the extended Songkran festival idea. Somkid said that he was prepared to propose to the Cabinet the extension of the long holiday since people will have to return to their hometowns and travel, thus boosting tourism and economic development.

In this regard, he has coordinated with Deputy Prime Minister Wissanu Krea-ngam, to consider adding special holidays in the first and second quarters to encourage Thai people to travel domestically during the first half of the year to mitigate the impact of the epidemic.

According to the Kasikorn Research Centre, the novel coronavirus disease (COVID-19) may cause economic losses of 500-700 million USD, or 0.09-0.13 percent of Thailand’s annual GDP if the disease lasts 3-6 months.

The tourism ministry expects a missing of 5 percent of tourist arrivals this year which will result in a loss of 250 billion THB (over 8 billion USD), or 1.5 percent of GDP./.