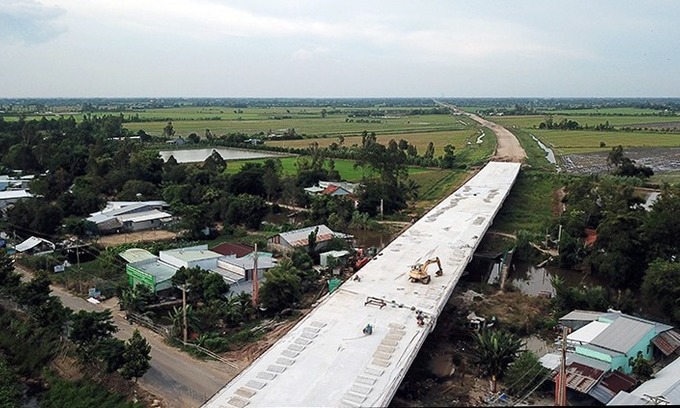 A section of the Lo Te – Rach Soi Expresway connecting Can Tho City with Kien Giang Province. Photo by VnExpress/Cuu Long.

A 51-km expressway connecting Can Tho City with Kien Giang Province in the Mekong Delta is scheduled to open in September.

Work on the expressway is 80 percent complete, officials say. The Lo Te – Rach Soi Expressway runs southwest from the Lo Te T-junction in Thot Not District, Can Tho City to Rach Soi Commune in Rach Gia Town, Kien Giang Province.

The 17-m wide expressway with four lanes will connect with the Vam Cong Bridge, a major link in the Mekong Delta region, and will be a part of the western part of the North-South Expressway that will run from Binh Phuoc Province via Ho Chi Minh City to Ca Mau Province.

Construction of the VND6.3 trillion ($270.5 million) Can Tho expressway started in 2016, with a VND4.5 trillion ($193 million) loan from South Korea and the rest sourced from state coffers.

However, land clearance is yet to be completed in several communes and project investor has urged local authorities to push this process to ensure its completion on schedule.

Vietnam is planning and building several major expressways in the southern region to improve connectivity between HCMC with neighboring provinces. Among these is the Trung Luong-My Thuan Expressway, which could open to traffic at the end of this year, after a delay of ten years.