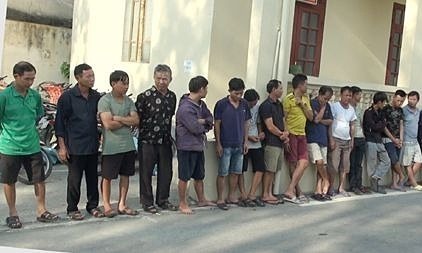 Jail terms of between 26 and 30 months were handed to seven suspects in central Thanh Hoa Province for stealing dozens of dogs.

Le Thi Phuong, 35, the gang leader, was jailed for 30 months at the Monday trial for directing the theft of dozens of dogs, though earlier media reports had said the arrested suspects had confessed to stealing thousands.

According to the indictment, the gang stole 21 dogs, totaling around 253kg and worth around VND17.71 million ($760), last September.

At the time of arrest, media reports had said that police found 51 dogs and the gang had admitted to having stolen thousands since the beginning of last year, totaling an estimated 100 tonnes.

After the arrest, dozens of dogs were reunited with their owners, while those who didn’t were either temporarily taken care of by police or taken to dog rescue centers for adoption.

Dog theft is treated as a crime only when a canine is valued at more than VND2 million ($86). Vietnam has no law against trading in and consuming dog meat.