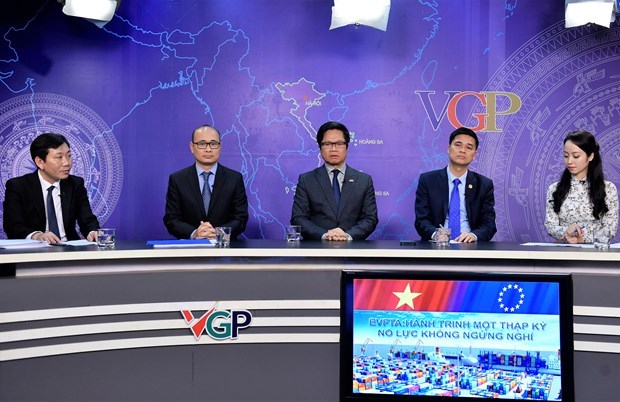 At the event (Photo: baochinhphu)
Hanoi (VNA) – The government portal held a
seminar in Hanoi on February 14 to review the decade-long efforts on the
European Union – Vietnam Free Trade Agreement (EVFTA).

On February 12, the EVFTA was ratified by the European Parliament with 401 votes for, 192 against and 40 abstentions. The move also reflected Vietnam’s important political stature in the region.

Once the deal takes effect, over 99 percent of tariff lines will be removed, thus creating favourable conditions for the EU’s exports to Vietnam.

Speaking at the event, President of the Vietnam Chamber of Commerce and Industry Vu Tien Loc described the EU as a huge market with the world’s biggest purchasing power.

Head of the Ministry of Industry and Trade’s Multilateral Trade Policy Department Luong Hoang Thai said the EVFTA marks the success of the economy during global integration and reflects determination in expanding trade ties with the EU.

Head of the Ministry of Agriculture and Rural Development’s International Cooperation Department Nguyen Do Anh Tuan said the EU has a need to import about 150 billion USD worth of Vietnamese farm produce each year, and this means the room remains huge.

Meanwhile, Vice President of the Vietnam General Confederation of Labour Ngo Duy Hieu affirmed that workers will have more competitive and sustainable jobs with higher income thanks to the deal./.