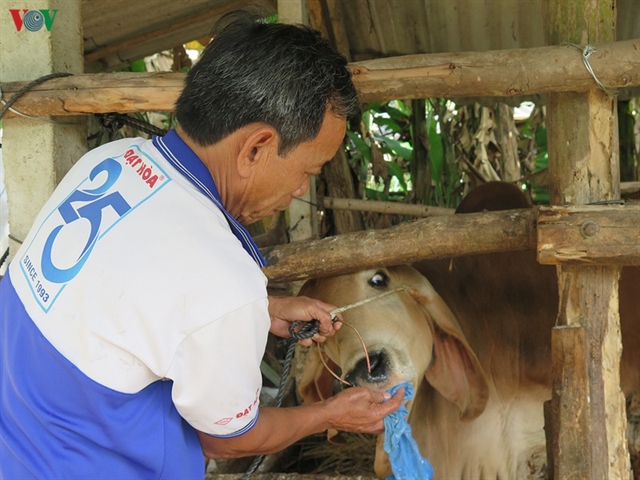 A farmer checks a buffalo suspected of having foot-and-mouth disease in Quảng Ngãi Province. — Photo vov.vn

QUẢNG NGÃI — Foot-and-mouth disease in cattle is spreading rapidly in central Quảng Ngãi Province, despite the efforts of animal health workers and local authorities to put an end to the epidemic.

The epidemic started late last year and has spread to more than 500 farming households in six districts with nearly 1,600 cattle infected.

Bình Sơn District has the highest number of cattle infected with the disease, the Voice of Việt Nam reported.

Võ Quang Sinh, a veterinary official from Nghĩa Kỳ Commune, said the epidemic was caused by poor hygiene standards during the slaughtering process.

“The epidemic has developed more than in previous years. Last year, the disease only affected pigs, but this year it has hit cows and buffaloes,” he said.

Nearly 18,000 doses of vaccine and 13,000 litres of antiseptic were delivered to districts.

Director of the provincial Animal Husbandry and Veterinary Department Ngô Hữu Hạ has asked localities to strengthen control of trade, transportation, slaughtering, veterinary hygiene and food safety to stop the spread of the disease. — VNS