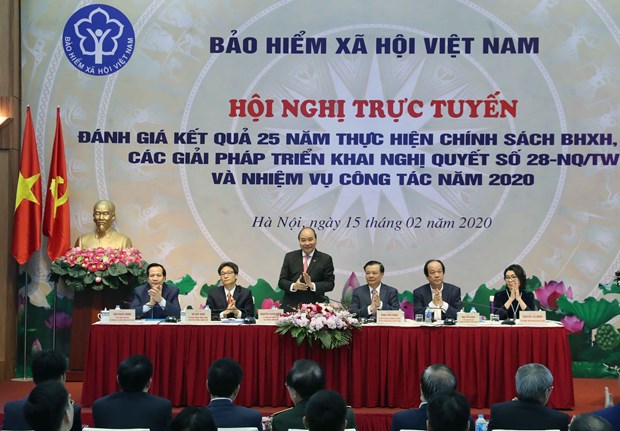 Prime Minister Nguyen Xuan Phuc (third, left) and other officials at the teleconference of the Vietnam Social Security in Hanoi on February 15 (Photo: VNA)

Hanoi (VNA) – Vietnam has basically achieved the
target of health insurance for all, but it still needs to further expand the
coverage of social insurance, according to Prime Minister Nguyen Xuan Phuc.

The Government leader made the request at a teleconference held by the Vietnam Social Security (VSS) in Hanoi on February 15 that reviewed the 25-year implementation of social and health insurance policies.

Highlighting the VSS’s role as the main pillar in the social security system over the last 25 years, he noted that while Vietnam is still a lower-middle-income country with per capita income of over 2,800 USD in 2019, the average life expectancy of Vietnamese people has surpassed 73.6, which is high compared to the world’s average, and the multidimensional household poverty rate has been brought down to under 4 percent.

Given this, Vietnam has basically achieved the target of health insurance for all ahead of schedule, the PM said, adding that it took some developed nations 40 – 80 years to attain universal health insurance coverage.

Caring for people’s life, health and prosperity is the responsibility of the Party and State, and it is necessary to have a social security system that covers all people and matches international standards. To that end, social insurance coverage must be expanded, he emphasised.

At the meeting, PM Phuc requested regular overhauling of social and health insurance policies and laws in line with international practices, stronger administrative procedure reforms, completion of the national database on insurance, better connection and information sharing among ministries and sectors, and processing of administrative procedures on the National E-Document Exchange Platform to help build an e-Government./.