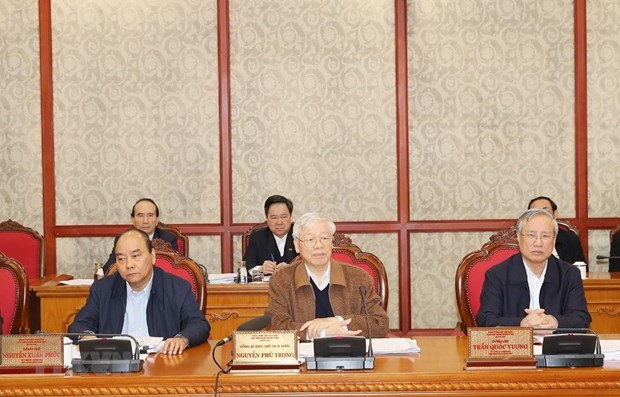 Hanoi (VNA) – Party General Secretary and President Nguyen Phu
Trong on February 14 chaired a meeting of the Political Bureau to give opinions
so as to complete draft documents of the 13th National Party
Congress before sending them to grassroots-level Party congresses for
collecting more ideas.

Participants heard statements and reports supplementing and completing the draft Political Report and the draft report on the 10-year implementation of the Platform on National Construction in the Transition Period toward Socialism (Platform 2011), the draft Socio-economic Report, the draft Report on Party Building and the Implementation of Party Regulations, which will be submitted to the 13th National Party Congress.

The Politburo lauded efforts by the sub-committees and the editorial groups to acquire ideas of the Party Central Committee and the Bureau to complete the draft reports, which basically meet the set requirements and targets.

Party General Secretary and President Nguyen Phu Trong asked the sub-committees and the editorial groups to recheck the draft reports to ensure consensus in opinions and thought with the Political Report put at the centre./.