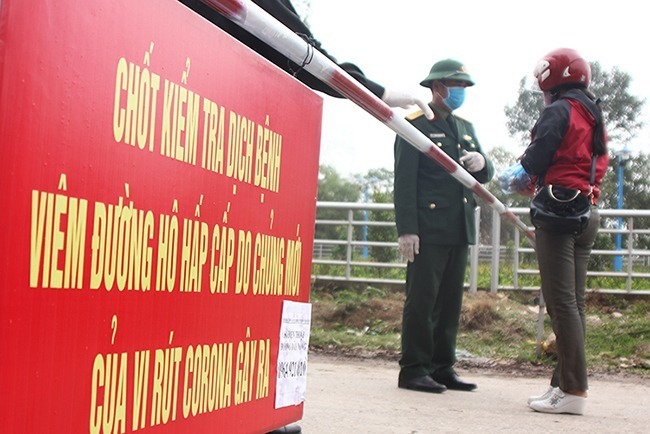 However, they accept these and other inconveniences as necessary safety measure and believe that they will be effective in containing the novel coronavirus epidemic.

In the commune in northern Vinh Phuc Province ‘s Binh Xuyen District two ambulances are always on standby next to the local medical center: one for transporting patients in an emergency as well as those with chronic diseases who need to be moved to a higher-level hospital; and one exclusively for transporting those suspected of the carrying the novel coronavirus (Covid-19) infection.

Teams of medical staff and military doctors carry containers of disinfectant to periodically spraying every nook and cranny in the commune to clean and disinfect the area.

Ever since a three-month-old baby in the commune contracted the virus from a company employee who’d returned home from China’s Wuhan City – the epicenter of the virus outbreak – the health of every commune resident is monitored every day so that any infection can be detected early and treated in a timely manner.

Son Loi Commune is home to half of 16 confirmed Covid-19 cases in Vietnam. It was placed under lockdown last Thursday as an emergency attempt to contain the spread of the virus.

“If anyone develops symptoms such as coughing, fever or body pain, we’ll take them to the quarantine zone,” Tran Nhu Duong, deputy head of the National Institute Of Hygiene And Epidemiology and head of the health ministry’s special working group, said at a meeting in Binh Xuyen District on Saturday.

“They will have their samples taken and tested to determine whether they have Covid-19 or not,” he said.

Medical centers in the commune have also established a screening area for Covid-19 patients.

Nguyen Thi Thuy, a local medical worker, said the lockdown was not so severe that no one can leave or enter. The authorities have only set up checkpoints to measure people’s body temperature and spray disinfectant.

About 10 checkpoints have been set up in the commune with 96 medical workers taking turns to day and night.

The mobilization of doctors from provincial and central hospitals, radio broadcasts and leaflets with relevant Covid-19 information have helped raise locals’ awareness on disease prevention measures.

Nguyen Van Thuan, a resident of Ngoc Bao Village, said he had been washing his hands regularly, wearing a face mask when going out and disinfecting his house regularly.

“Having to stop to have body temperature checked and disinfected when going in and out of the commune, then having to make health reports everyday is inconvenient, but I feel more at ease. I believe these measures will help us avoid being infected with nCoV,” Yen said.

However, not everyone in the commune has been accepting of the restrictions.

315 local residents have left the area since the quarantine came into effect and local authorities are working to bring them back for mandatory quarantining, said Nguyen Thanh Hai, director of Vinh Phuc’s health department.

The quarantining of Son Loi Commune and of residents suspected of carrying the Covid-19 infection in Vinh Phuc’s other localities will be in effect for 21 days, and would end if no new infection is confirmed during this period.

He emphasized the need to perform well the zoning and screening of infected patients so they are isolated, treated and their living environment disinfected.

“We need to keep the people informed so they won’t be confused and panic but remain vigilant instead. Health officers need to continue screening carefully so as not to overlook anyone that needs to be quarantined,” Tuyen said.

Other communes in Binh Xuyen District have also asked residents to remain calm and vigilant, and avoid traveling to areas with infection risks.

“Over the past few days, people in Binh Xuyen District and Son Loi Commune have been going on with their lives as usual. The epidemic is still under control. We are proactive in zoning, controlling and trying to extinguish the epidemic,” said Vinh Phuc Chairman Vu Viet Van.

Vietnam declared the novel coronavirus outbreak an epidemic on February 1.

So far, the country has confirmed 16 infections, seven of whom have been discharged from hospitals.

As of Sunday morning the global death toll has climbed to nearly 1,700, including five outside China.