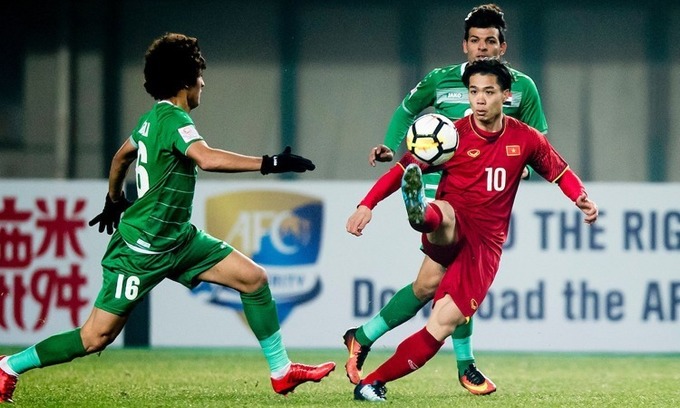 Vietnamese forward Nguyen Cong Phuong (in red) in an AFC U23 Championship match against Iraq in 2018. Photo by VnExpress.

The Iraq Football Association has suggested canceling the friendly football match with Vietnam scheduled for March 26 over the novel coronavirus epidemic.

The Vietnam Football Federation (VFF) said Wednesday it was considering Iraq’s suggestion, adding that such a cancellation would not constitute a breach of contract and thus require no compensation.

If the match is canceled, Vietnam would have to find another partner on its own, which could be difficult as not many teams would want to go to Southeast Asia for football matches amidst a virus outbreak.

The lack of match practice would prove to be a challenge for South Korean coach Park Hang-seo’s preparations for a World Cup qualification match between Vietnam and Malaysia on March 31.

Vietnam and Iraq had first agreed on a friendly on January 31, to be played at Saigon’s Thong Nhat Stadium or neighboring Binh Duong Province.

Vietnam is currently at the top of its group in the World Cup qualifiers, followed by Malaysia, Thailand, UAE and Indonesia.

The ongoing coronavirus outbreak, first detected in China’s Wuhan City last December, has caused several Vietnamese football tournaments, including the V-League and the National Cup, to be delayed until March.

Vietnam has confirmed 16 infected cases as of Thursday, with the latest being a 50-year-old man in Vinh Phuc Province, father of a previously infected patient who’d returned last month from Wuhan. From his elder daughter, who was one of eight employees of a Japan-invested firm sent to Wuhan, the infection spread to his wife, younger daughter, their cousin and a neighbor.

Seven of the infection cases have been discharged from hospitals.

The global death toll of the epidemic has reached 1,369, one person each in the Philippines and Hong Kong, and the rest in mainland China.