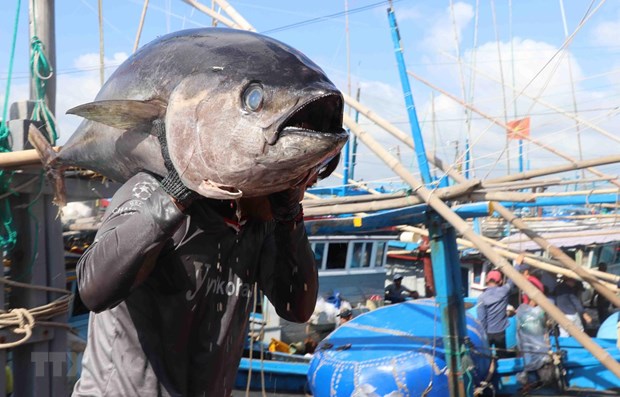 Illustrative image (Photo: VNA)
HCM City (VNA) – Expanding
international cooperation will be a key to helping the Vietnamese tuna sector
to create its brand in the global market, according to insiders.

Since 2014, the Directorate of Fisheries under the Ministry of Agriculture and Rural Development has supported tuna fishermen and businesses to implement cooperation projects with the Philippines.

The Global Nature Fund and the directorate have carried out a project improving ocean tuna fishing in the south-central coastal provinces of Binh Dinh, Phu Yen and Khanh Hoa.

Most recently was the technology cooperation in catching and exporting tuna between Kiyoshi Kimura, a Japanese businessman nicknamed “Tuna King”, and Phu Yen.

In 2019, Vietnam’s tuna exports exceeded 719 million USD, a year-on-year rise of 10.2 percent, according to the Vietnam Association of Seafood Exporters and Producers (VASEP).

Exports saw strong growth at the beginning of the year but slowed towards the year-end.

Tuna exports to the European Union earned roughly 140 million USD, down 11.8 percent year-on-year as a consequence of the EU’s “yellow card” warning issued in October 2017 after the country failed to demonstrate sufficient progress in fighting illegal, unreported and unregulated (IUU) fishing.

From the second largest importer of Vietnam’s aquatic products, the EU fell to the fifth, behind the US, Japan, the Republic of Korea, and China.

Vietnam has forecast 15-percent growth in tuna shipments in 2020 but in the first months of the year, only slight increases are likely because of the relatively high inventories held by key foreign markets./.