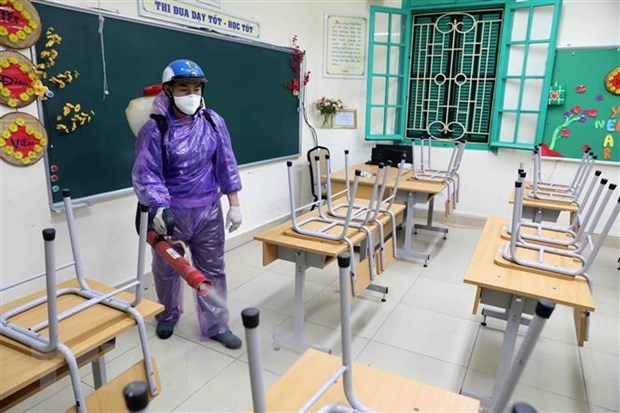 HCM City (VNA) – Local officials in HCM City and Hanoi announced on February 14 that schools will remain shut for at least another week due to concerns about the spread of COVID-19.

The move means schools, universities and colleges in the country’s two biggest cities will have been shut for a full three weeks after the end of the Lunar New Year holiday.

Schools are required to have chairs, desks, classrooms and their campus disinfected and cleaned.

Speaking at a meeting of the National Steering Board for Prevention and Control of COVID-19 held on February 14, Deputy Prime Minister Vu Duc Dam said that if parents and students were still worried, provincial and city authorities should keep schools closed.

The Deputy PM said that despite problems posed by the closure, the health and security of the people were the most important.

On February 11, Dam told the Ministry of Education and Training to quickly issue detailed guidance for managers of relevant agencies as well as teachers, students and parents on how to ensure safety when students return to school.

Schools should carry out preventive measures to ensure that their classrooms are safe and increase communications with parents to lessen their anxiety about the reopening of schools.

Most universities throughout the country were still closed as of February 14 afternoon. Several of them have delayed their examinations.

A team led by Deputy Minister of Education and Training Nguyen Van Phuc has checked the prevention and control measures for COVID-19 at several universities.

Minister of Education and Training Phung Xuan Nha on February 14 affirmed that the 2019-2020 academic year will end later amid the outbreak of COVID-19.

Several localities have decided that students will return to schools on February 17 after two weeks of shutdown, he said, adding that classes should resume once safety measures are adopted as guided by the Health Ministry./.