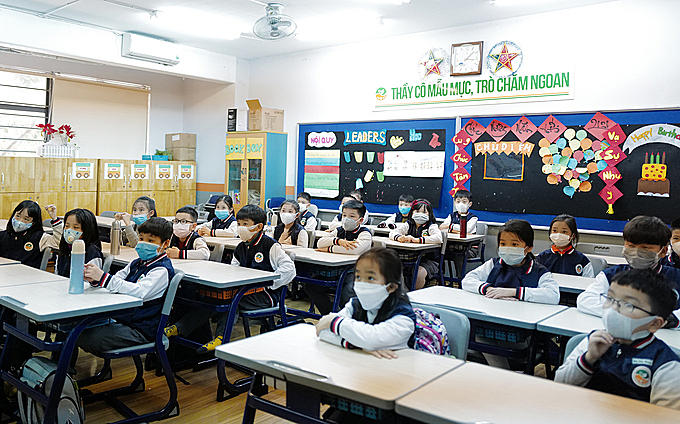 Students in Hanoi will have their break extended until February 23, the municipal People’s Committee Chairman Nguyen Duc Chung said at a meeting Friday.

This is the third extension that the students are getting after their seven-day Tet (Lunar New Year) break. Schools were set to reopen on February 3, but the break was extended by a week two times in succession as a precautionary measure against the Covid-19.

Chung has also directed Hanoi’s education and labour departments to work with the Ministry of Education and Training to rearrange the school holidays into four main breaks. Accordingly, students will get 30 days off for Tet, 35 days for summer, and two weeks each for the remaining two breaks.

Reshuffling the school holidays this way will help stimulate consumption, balance out city traffic, and stimulate domestic tourism, Chung said. Vietnamese students normally get up to three months off every summer.

In the event students are allowed to return to school after February 23, schools must disinfect premises every day at the end of each class, Chung said.

As of Friday afternoon, Hanoi had not reported any patients testing positive for the Covid-19, but local authorities have instructed 1,620 people to isolate themselves at home and quarantined another 61, most of whom have recently returned from China, in hospitals. So far, 58 of the 61 have tested negative for the pneumonia causing virus.

In Ho Chi Minh City, authorities have extended the school holidays for its students even further to February 29.

The municipal People’s Committee said it will propose to the government and the Ministry of Education and Training that the break is extended to the end of March, and the schedule for the 2019-2020 school year gets adjusted to have students attend classes from April to July, break during August, then return in September as usual.

“The decision is based on the city’s assessment of the epidemic, which has developed in an unpredictable and complicated manner. The health and lives of people is our top priority,” said Tu Luong, deputy head of the HCMC Department of Information and Communications.

As of Friday, the city had recorded three Covid-19 infections, two are a Chinese father-son duo and one is a Vietnamese-American who transited in Wuhan for two hours en route. The two Chinese have been discharged from hospital.

Like Hanoi, the provinces of Vinh Phuc and Dong Nai have extended their school break to February 23.

Vinh Phuc, which has recorded the highest number of confirmed Covid-19 cases in the country, has one grade 10 girl confirmed with the virus and is being treated at the Binh Xuyen District Health Center.

The northern province has also quarantined six other students in the same class who had come into contact with the girl, and 35 remaining classmates have been instructed to isolate themselves and monitor their health at home, said Nguyen Thanh Hai, head of the Vinh Phuc Department of Health.

Vinh Phuc Thursday locked down Son Loi Commune in Binh Xuyen District for a fortnight as eight residents tested positive for the Covid-19.

Eleven of the 16 infections recorded in the country so far have been in Vinh Phuc, which neighbors Hanoi. The source of the infections are a group of eight workers of Japanese-invested Nihon Plast Company Limited who returned from China’s Wuhan City, the virus outbreak’s epicenter, on January 17.

In total, Vinh Phuc has quarantined 373 people, of whom 104 have so far tested negative for the virus and the other 258 are being monitored at medical centers after they were found to have come into contact with patients.

Meanwhile, Dong Nai has not had any confirmed infection, but the southern province has isolated 760 people who have recently been in high risk areas. It has also proposed to the provincial education department and the Dong Nai Radio and Television Station to launch online and TV classes for students.

The Ministry of Education and Training on Thursday instructed that localities that do not have Covid-19 patients can send students to school after detoxifying and disinfecting school facilities. “Localities with Covid-19 infections must continue monitoring and only send students to school when there are adequate disease prevention measures in place and no new infection cases are reported.”

Deputy Prime Minister Vu Duc Dam said at government meeting Friday, “Safety should be guaranteed both from the professional perspective and that of students and parents. Students should not be sent back to school if there are still worries about getting infected and worries over whether they should wear a mask in class or not.”

The death toll from the epidemic has climbed to 1,384, three of them outside mainland China.