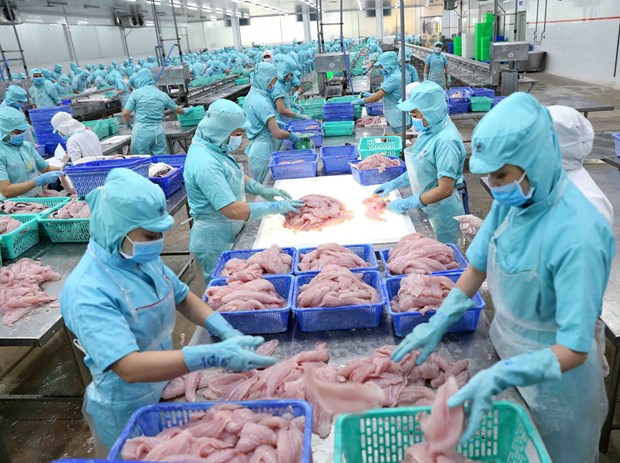 Workers process tra fish for export at the factory of the Sao Mai Group in the Mekong Delta province of An Giang (Photo: VNA)

HCM City (VNA) – The fisheries
sector of Vietnam is facing an array of difficulties as the acute respiratory
disease caused by the novel coronavirus (COVID-19) has led to contracted
exports.

According to the Vietnam Association of Seafood Exporters and Producers (VASEP), aquatic exports in January fell 25 percent from the same period last year to 556 million USD.

The only highlight last month was the EU, to which aquatic exports grew 13 percent to 127 million USD.

Additionally, the strong COVID-19 outbreak in China in early February has caused serious impact on multiple fields like transport, tourism, retail, as well as the production and export of aquatic products.

In 2019, China was the largest importer of Vietnamese tra fish with the value of 622.7 million USD, equivalent to 31 percent of total tra fish exports. Thanks to stable export growth, good prices and diverse segments, many domestic processors continue to see China as their strategic market for 2020. Therefore, when Vietnam-China trade is interrupted by the COVID-19 epidemic, tra fish is the hardest-hit commodity, Hoe noted.

Tran Van Hung, Director of the Hung Ca Co. Ltd, said for those companies that have diversified their markets, the discontinuity in tra fish shipments to China only affects part of their operations. However, for those that mainly target the Chinese market, they will suffer heavy losses if the epidemic is not curbed soon.

However, some shrimp exporters said goods previously ordered by Chinese partners now have to be kept in storage as importers have to delay delivery dates. Meanwhile, demand in the Republic of Korea, the US and the EU show signs of decrease due to fears of COVID-19.

VASEP noted in the most positive scenario that the epidemic is put under control during the first quarter of 2020, aquatic exports to China in the first three months will shrink by at least 40 percent from Q4 of 2019. They will continue recovering in the following quarters and return to normal in the second half of this year.

In case the epidemic lingers, exports to China will plummet, leading to declines in shipments to other markets, and Vietnam’s aquatic exports in 2020 may grow by only 3 – 4 percent from last year, the association added.

In this context, VASEP has recommended businesses to keep updated with information from Chinese partners to ship the previously ordered batches immediately when customs clearance is permitted to minimise preservation and storage expenses.

Firms have also been suggested to adjust processing and farming plans to avoid excessive supply of materials.

VASEP is also set to propose the Ministry of Agriculture and Rural Development and the Government issue policies supporting affected businesses and farming households such as by reducing lending interest rates and extending loan payment deadlines./.