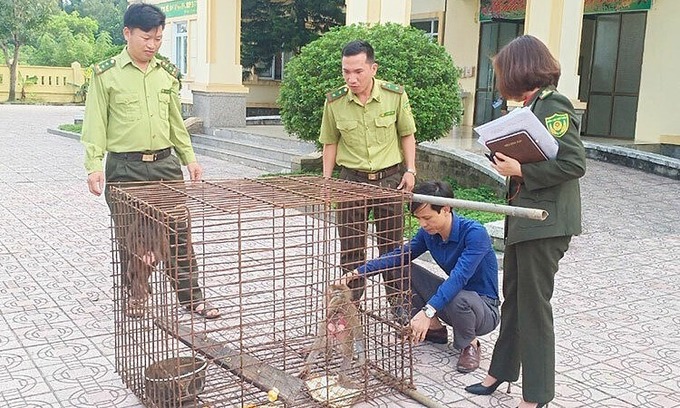 Authorities and rangers in Huong Son District, Ha Tinh Province, check the two macaques before releasing them back to nature on February 13, 2020. Photo by VnExpress/Gia Han.

A stump-tailed and pig-tailed macaque held captive in north central Vietnam were transferred to a national park following rescue.

After learning that local man Nguyen Van Luan, 59, kept the stump-tailed macaque, weighing four kilos, and the pig-tailed macaque, at five kilos, in a cage, local rangers joined with environmental police to demand their freedom.

Luan said he had kept the two monkeys for several days as living ornaments. When approached by authorities, aware the animals are endangered, he gave them up.

Staff at Vu Quang National Park, spread across 53 hectares (130 acres) and including around 97 percent of natural forest, confirmed both monkeys are healthy and ready for release back into nature.

Both macaque species are classified “vulnerable” by the International Union for Conservation of Nature (IUCN) and appear on the IUCN Red List of Threatened Species.