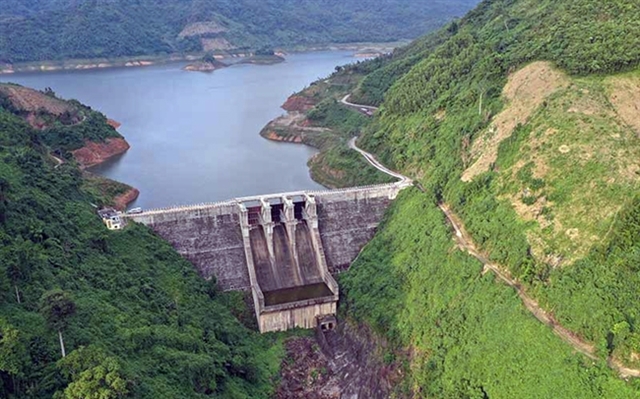 A Vương Hydropower Plant’s reservoir only stores about 30 per cent water as planned so far this year. —Photo nhandan.com.vn

NGHỆ AN  — Many hydropower plant reservoirs in the central region are facing water shortages, impacting electricity generation and water reserves for the ongoing dry season from February until July.

Greatly decreased rainfall compared to the annual average of previous years was blamed for the situation.

In Nghệ An Province, Tạ Hữu Hùng, director of Bản Vẽ Hydropower Plant, said the amount of water flowing into the plant’s reservoir in the 2019 flood season, between August and January, was only 67 per cent of the annual average.

This resulted in a power shortage of 262 million kW hours last year compared to 2018, he said.

Hủa Na Hydropower Plant, the second-biggest hydropower plant in the province, faces the same problem. The water volume in its reservoir only reached about 60 per cent in 2019 compared to the annual average, causing a power shortage of about 16 per cent last year.

The reservoirs have also failed to store enough water for the dry season this year.

The provincial Natural Resources and Environment Department has forecast the amount of water flowing into Cả River’s basin from now to June will only reach 30-60 per cent as previously expected.

In Quảng Nam Province, Lê Đình Bản, director of Sông Bung Hydropower Plant, said the plant’s reservoir had only stored about 75 per cent of the water it needed.

In 2019, power generation only reached about 49 per cent of the goal.

Ngô Xuân Thế, deputy director of A Vương Hydropower Plant, said the plant’s reservoir only stored about 30 per cent of the water it had planned to so far this year.

In response to the situation, the Ministry of Natural Resources and Environment has ordered hydropower plants to cut water discharges to reserve water to combat the dry season and only generate electricity in rush hours to ensure energy security.

In a related development, the National Steering Committee for Power Development issued a document on January 31 on solutions to ensure electricity supply for the next five years.

To reach the goals, the Electricity of Việt Nam could consider hiring ships and barges to use as floating power plants to supply electricity in case southern thermal projects continue to be slowly implemented.

The committee said it saw such a move as an effective short-term and medium-term solution for countries with emergency power supplies.

Therefore, localities were told to create favourable conditions for investors to carry out solar and wind energy projects and encourage the development of solar energy, the committee added. — VNS