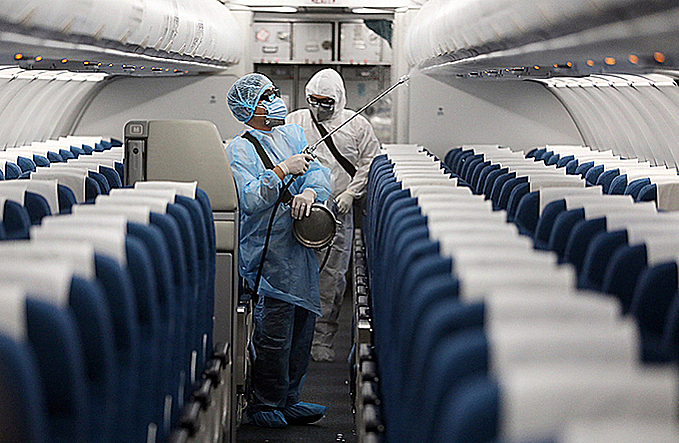 It included two consecutive sessions on January 30 and 31 when the stock lost the maximum allowed 6.9 percent, its “floor price”. January 30 was the date on which the Vietnam Civil Aviation Authority (CAAV) ordered Vietnamese airlines to halt all flights between the country and China.

Stocks of budget carrier VietJet, one of the 30 biggest in terms of market capitalization on HoSE, also lost 7 percent in one session and 4.44 percent in another.

The stock has recovered slightly in the past few sessions, but still lost 11.9 percent since January 30, wiping out VND8 trillion ($343.87 million) in market cap.

In the same period state-run Airports Corporation of Vietnam, which manages 21 out of 22 airports in the country, lost 13.2 percent, while aviation services provider Southern Airports Services JSC lost 8.8 percent.

According to preliminary reports by Vietnamese airlines, by February 10 domestic carriers had lost over VND10 trillion ($430.5 million) after suspending all flights to China on January 30, said Dinh Viet Thang, head of CAAV.

CAAV stated 640 flights a week have been canceled resulting in a passenger loss of 400,000 a month. Eleven Chinese airlines were operating on average 240 flights per week to Vietnam, with Vietnam Airlines and budget carriers Jetstar Pacific and Vietjet operating 401 flights along 72 routes.

There were also expenses related to cancellation and refund of tickets already booked on China flights and anti-epidemic sanitary measures, it said.

Between February 1-7 airlines transported 1.95 million passengers, down 4.5 percent year-on-year overall and 14.1 percent on international routes, according to CAAV.

If it abates by April, the number of passengers passing through Vietnam’s airports could reach 119 million this year, a 2.1 percent growth.

If it ends by June, this number would fall to 111.6 million, down 4.2 percent. In the worst case scenario, if it goes on unabated until August, the number of visitors could fall 15.5 percent to 98.5 million.

According to industry insiders, amid the Covid-19 threat, the aviation industry would very unlikely recover within the next 2-3 months.

To support carriers, the CAAV said it would offer them discounts on aviation services provided by the government such as air traffic control and direct private service providers too to reduce their prices or extend payment periods.

The Ministry of Transport has also reported that the epidemic has hit the country’s two major state-owned railroad operators.

Hanoi Railway Transport JSC, which operates routes in northern Vietnam, said by February 10 it had refunded 26,630 tickets worth VND13 billion ($558,800) as people have been wary of traveling by train amid the epidemic.

Saigon Railway Transport JSC, the southern operator, also had to stop running 26 trains, including a transnational service as of February 10. It said it also had to limit service on some routes to weekends only.

Shares of the two railroad operators, which are both penny stocks, plummeted by up to 30 percent between January 30 and February 13.

The Covid-19 epidemic has also severely cut cargo transport between Vietnam and China. On an average day, 12 to 14 trains cross the Vietnam-China border, but this number has fallen to around four per day, according to the Ministry of Transport.

Around 120 carriages carrying cassava starch, equivalent to 4,000 tons, is currently stuck at Dong Dang border gate in northern Lang Son Province because Chinese customs are not taking them in.

As a result, the ministry predicts February and March revenue for the cargo rail sector would fall 30 percent year-on-year.

According to Nguyen Van Quyen, chairman of Vietnam Automobile Transport Association (VATA), the number of passengers registered passing through coach stations have fallen by around 50 percent, causing revenue to fall.

In order to reduce difficulties, VATA will petition the government over tax cuts, reductions in road tolls, and bank loan restructuring for transport businesses.

The number of confirmed COVID-19 infections in Vietnam has reached 16, the latest being a 50-year-old man in northern Vinh Phuc Province.

The global death toll from the epidemic reached 1,523 on Saturday, with 1,520 dying in mainland China, one in the Philippines, one in Hong Kong and one in Japan.