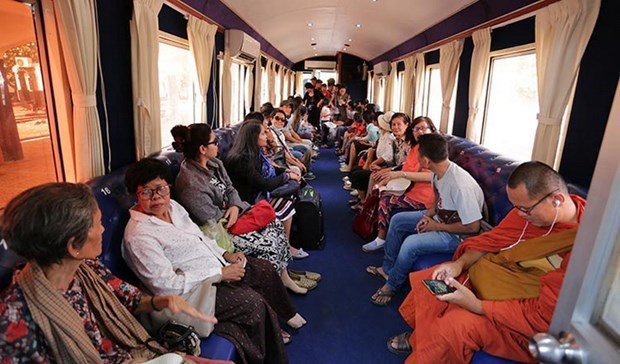 Phnom Penh (VNA) – Railway authorities of Cambodia and Thailand set to meet on
February 14 for final discussions on cross-border rail transportation between
the nations.

The two countries’ agreement on cross-border railway was signed last April, but yet to be implemented, Ly Borin, under-secretary of state of the Ministry of Public Works and Transport, told Khmer Times.

He said his team will talk with the Thai counterparts about the transnational railroad and final documents will be inked to make sure people and cargo from both countries can cross the border via train, Ly said.

The new connection will make the transportation of cargo more efficient, lower costs, improve security, reduce traffic jams and contribute to the development of both countries as well as add a further link with the rest of ASEAN members and the Mekong sub-region.

Ly unveiled that the two countries were about to start cross-border rail transportation in October last year, but floods damaged the railway, so Cambodian authorities delayed the move. He added that now the track is fixed, both countries are nearly ready to start its operations.

Cambodia plans to start in March at the latest to ensure the cross-border rail transportation runs smoothly, he said.

In April last year, Cambodian Prime Minister Hun Sen and his Thai counterpart Prayut Chan-o-cha presided over the inauguration ceremony on the reconnected railroad network more than 40 years since the route stopped. Both governments expect it will improve transportation and boost trade.

Thailand donated a diesel multiple unit (DMU) train, powered by on-board diesel engines that require no separate locomotive, to Cambodia. It was manufactured by Japan’s Hitachi company and comprises four carriages, each able to carry 80 passengers.

The 386-km northern rail route connecting Cambodia and Thailand starts at Phnom Penh and travels to Poipet on the Thai border. At Poipet, a Thai train engine will be fitted to allow onward passage to Bangkok.

According to the Cambodian Commerce Ministry, bilateral trade between Cambodia and Thailand reached 9.41 billion USD by the end of 2019, up from 8.39 billion USD in 2018. Cambodia’s imports from Thailand totalled around 7.14 billion USD while exports stood at 2.27 billion USD./.