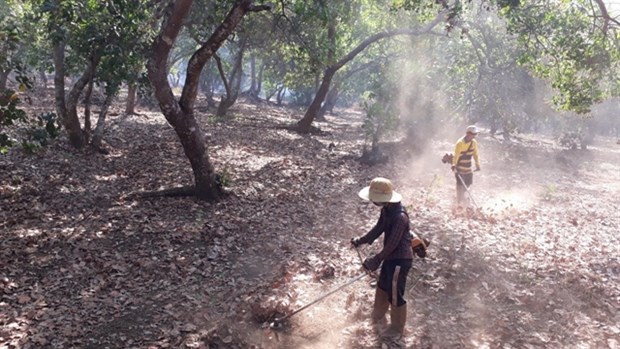 Binh Phuoc (VNA) – Farmers
in Binh Phuoc province have begun to harvest their cashew crop and yields are
higher than last year because of favourable weather and the efforts of
authorities and farmers to prevent diseases.

Last year, many cashew farms in the southeastern province, the country’s largest cashew producer, were affected by diseases and had low yields, but authorities and farmers have taken measures to tend disease-affected orchards this year, enabling them to recover and bear more fruits.

This year, the rate of flowers developing into fruits is in fact high at more than 50 percent in most orchards, according to farmers.

Dieu Thanh, a farmer in Bu Gia Map district’s Dak O commune, said the weather this year is much better for cashew trees to fruit than last year.

Last year, inclement weather caused disease outbreaks, making his yield to decline, and his family had to spend dozens of millions of dong on fertiliser and labour to revive the orchard this year, he said.

Most cashew trees flowering this year have a high fruiting rate and harvest has begun, he said.

Dieu Hung, who has a 4ha cashew orchard in Bu Gia Map district’s Phu Van commune, said the harvest season this year came a few days after Tet (Lunar New Year) making it convenient for farmers to clean their orchard and do the harvest.

At the beginning of the blossoming season, the province’s Agriculture Service Centre organised farming courses for hundreds of cashew farmers.

They were taught techniques to make the trees flower at the same time and how to treat some common diseases.

The most common disease is anthracnose, a fungal infection that damages flowers and fruits. Mosquito bugs and the striped mealybug are major pests.

Farmers are having a good harvest, but the price of cashew is currently low.

The province has more than 130,000ha under cashew, according to its Department of Agriculture and Rural Development.

It is among the crops that have helped farmers escape poverty in recent years.

The province’s cashew nut has been granted geographical indication certification./.