If you think the weather is a little on the chilly side in Việt Nam right about now, it’s positively toastie compared to other parts of the world, particularly England. 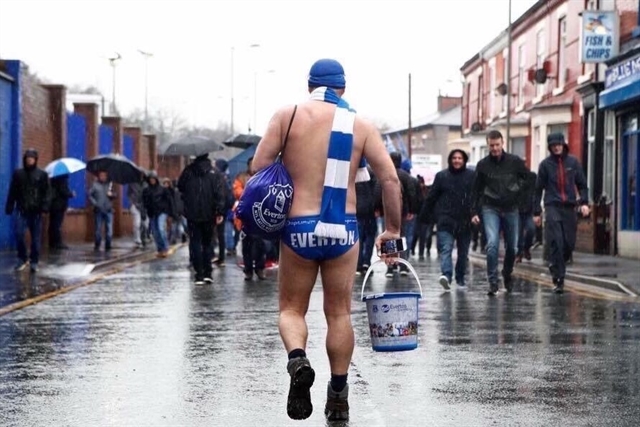 So when you ‘wrap-up’ warm for your next trip to the grocery store or journey to the bia hơi, spare a thought for those in the west where temperatures in some places have dropped well below freezing.

No matter how many layers of clothes you don, it will hardly be enough to keep the cold at bay, especially if you are out and about in the UK as first Storm Ciara caused serious weather worries, and Storm Dennis is forecast to follow and bring even more snow over the weekend.

Now, imagine walking not just a few kilometres, but the entire length of Great Britain, from John O’Groats in Scotland to Land’s End, in the southwest of England. That’s a fair ol’ hike, 1,407km to be exact.

But that is exactly what one football fan is doing right now.

Speedo Mick, Michael Cullen to use his real name, is walking more than a thousand miles to raise money for the UK charity Leave the Light On.

The charity provides help and support for anyone who feels isolated and is suffering. A very, very worthy cause.

Mick, who is from Liverpool in the northwest of England, is an avid supporter of Everton Football Club.

He first came into the limelight back in 2014 when, at the ripe old age of 50, he swam the English Channel, wearing the above-mentioned speedos, for charity.

Since then his endeavours have been nothing short of remarkable. This latest trek has seen him unite not just football fans, but just about everyone he has passed along his long and arduous journey from top to bottom of the UK.

The die-hard blue (supporter of Everton FC) was given a warm reception when he was introduced on the pitch of his team’s bitter rival Liverpool when the two clubs met in the FA Cup last month.

While I’ve no doubt Mick would have been bitterly disappointed with the score that night, I’m sure he took some solace from the support he received from all corners of Anfield.

Liverpool the city has a number of issues that can’t and won’t be fixed by the amazing efforts of one man.

Both football teams in the city play their part by helping food banks in the area but in the grand scheme of things as worthy as their work is, it is nothing more than a drop in the ocean of despair flooding many parts of the world right now.

Speedo Mick deserves a medal. A large one. In fact, we should soon be calling him ‘Sir Speedo Mick’ or ‘Speedo Mick MBE’ because of his tireless charity work.

Last time I checked, the amount reached on his GoFundMe page is pushing 200,000 English pounds, that’s the equivalent of about VNĐ6 billion.

Or, if we really want to cut to the chase, just a couple of week’s wages for the top footballers Mick, and many people who have donated to his cause, idolise.

Mick, a truly amazing human being, aims to raise a quarter of a million pounds with his walk in the freezing cold winter engulfing Britain right now.

Wouldn’t it really warm your heart if some of the extremely well-paid professional footballers in the world clubbed together to add another zero to that amount? — VNS