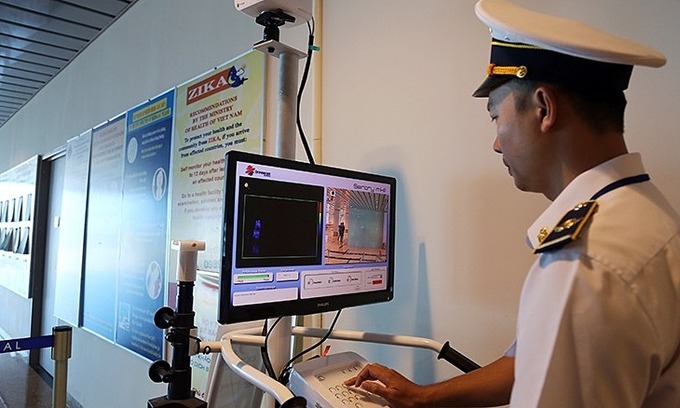 Major airports in Vietnam have installed devices to scan the temperature of people arriving from China, where a mystery pneumonia outbreak is raging.

Health authorities have installed five remote body temperature scanners at Noi Bai Airport in Hanoi to monitor people who have visited Wuhan in central China where a 61-year-old man has died and 41 others are infected.

Five infrared body temperature monitors have been installed at entry and exit points in Cam Ranh Airport near the popular resort town of Nha Trang in Khanh Hoa Province, a favorite destination for Chinese tourists.

Eight medical workers from the center are available 24 hours to monitor passengers at the airport.

Security forces and airport employees are also equipped to respond to possible cases of pneumonia. Health staff have been instructed to don medical masks and use antiseptic solution and disinfectant.

At monitoring points, signs have been installed asking people to stop for checking body temperature and health staff would scan visitors using computers.

Since the beginning of this year more than 40,000 Chinese have arrived at Cam Ranh Airport, according to official data.

Thai authorities on Monday confirmed the first case outside China of an infected patient.

The woman, 61, identified as a Chinese tourist from Wuhan, has been receiving treatment at a hospital in Nonthaburi near Bangkok since January 8, and is now recovering.