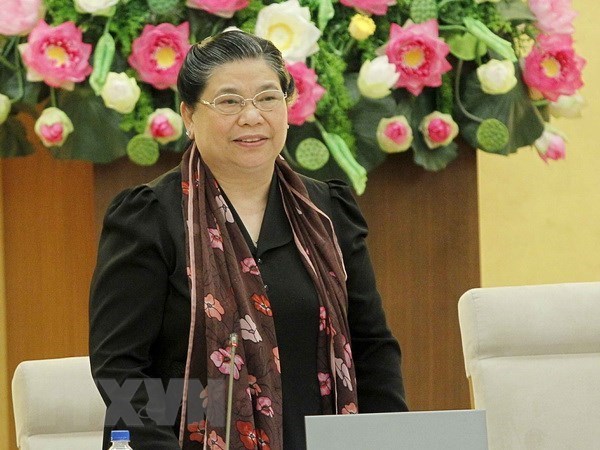 Canberra (VNA) – Multilateral parliamentary diplomacy plays an important role
amidst the rapid and complex developments in the regional and global situation,
Vice Chairwoman of the Vietnamese National Assembly Tong Thi Phong has said.

These efforts aim to create more resources and step up cooperation in addressing conflicts and disputes in the spirit of dialogue, openness, construction and mutual support, in line with international law, the legislator said, stressing the need for parties to exercise self-restraint and avoid actions that violate international law and may escalate tensions and complicate the situation.

Phong called on APPF member parliaments to join hands with governments, paying more attention to sustainable development and making sustainable, inclusive development the regular and long-term orientation for the sake of all sides.

On this occasion, the Vietnamese legislature proposed organising inter-parliamentary cooperation activities for sustainable development in 2020 when Vietnam serves as Chair of the AIPA.

In the framework of the APPF 28, the Vietnamese NA delegation has actively participated in meetings on politics-security, economy-trade, and the meeting of female parliamentarians.
On the sidelines of the APPF 28, Vice Chairwoman Phong met with Speaker of the Australian House of Representatives Tony Smith.

She took the occasion to express sympathy to Australia over human and property losses caused by wildfires in the country.

Phong affirmed Vietnam’s consistent policy of attaching importance to the strategic partnership with Australia. She thanked Australia for continuing to provide official development assistance (ODA) to Vietnam and creating favourable conditions for Vietnamese expatriates in the country to integrate into host society.

She also thanked Australia for backing Vietnam’s candidacy for a non-permanent seat in the UN Security Council in the 2020-2021 tenure, saying she hopes that the two countries will continue their collaboration and mutual support in regional and international issues, for peace, stability and development in the region and the world as well.

Regarding the bilateral legislative ties, she said the two sides should enhance the operational efficiency of the two friendship parliamentarians’ groups, as well as the sharing of working experience between their parliamentarians.

Phong conveyed Vietnamese NA Chairman Nguyen Thi Kim Ngan’s invitation to the Speaker of the Australian House of Representatives to attend the 41st General Assembly of the AIPA in the capacity as an observer parliament. The event is scheduled to be hosted by Vietnam in late August 2020.

For his part, Smith highlighted the thriving relations between Vietnam and Australia over the past decades, and affirmed that Vietnam holds an important position in the hearts of Australians.

He said bilateral cooperation in economy, trade, national defence and security is very important to the bilateral ties, which was touched upon by Prime Minister Scott Morrison during his official visit to Vietnam last August.

He agreed with the guest on the need to further promote the relations between the two parliaments and friendship parliamentarians’ groups./.