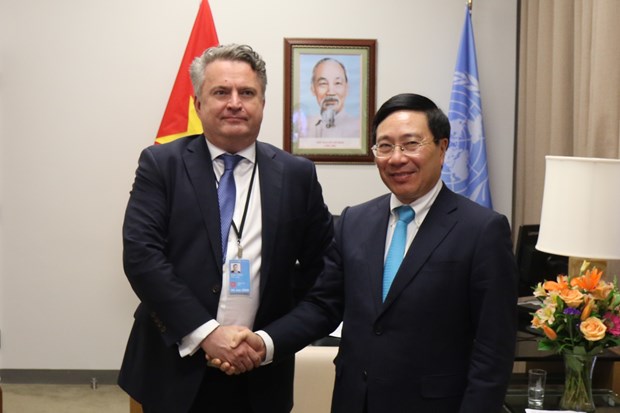 The Ministry of Foreign Affairs of Ukraine said in a news release that its deputy minister attended the UN Security Council open debate “Upholding the UN Charter to Maintain International Peace and Security”, chaired by Deputy PM and Foreign Minister Minh.

In his speech, Kyslytsya highly valued Vietnam’s initiative to launch the year marking the UN’s 75th anniversary with the discussion of the importance of upholding its founding document – the UN Charter.

The Ukrainian Foreign Ministry said at Kyslytsya’s meeting with the Deputy PM and Foreign Minister of Vietnam, the two sides focused on the prospects of strengthening relations in economic, trade and political areas, as well as of the enhancement of cooperation between the two countries at the UN and other international organisations. They also commended the ongoing development of friendly partnership ties between the countries.

In particular, they agreed to continue working on the preparation for vice-ministerial political consultations in 2020 and a visit by President of Ukraine Volodymyr Zelenskyy to Vietnam.

Minh expressed sincere condolences in connection with the crash of the Ukrainian plane in Iran and agreed with Ukraine’s position on the need to ensure a comprehensive, independent and transparent investigation into this tragedy./.