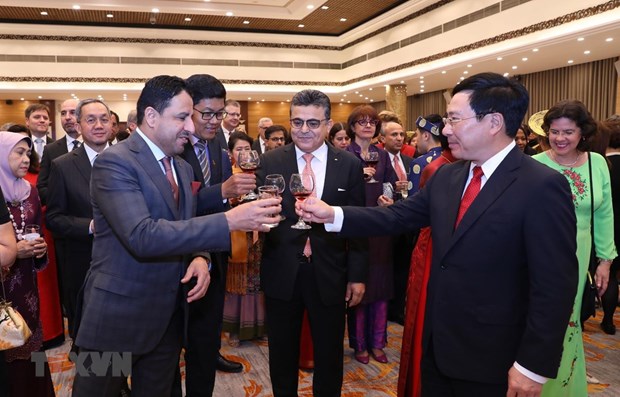 Hanoi (VNA) –  The Foreign Ministry, in
coordination with the Hanoi People’s Committee, held a gathering on the
occasion of the Vietnamese traditional New Year for the diplomatic corps in the
capital city on January 14.

Addressing the event, Deputy Prime Minister and Foreign Minister Pham Binh Minh said as he had just returned from the open debate of the UN Security Council, he noticed that peace, cooperation and development are still the major trend in the world despite unrest and tensions in some places.

According to Minh, multilateral institutions and international law are still respected, and dialogue instead of confrontation, and cooperation instead of struggle are still the mainstream.

He said mankind continues its course towards a better world of equality and sustainable development, of which the Asia-Pacific region and the ASEAN continue to be the bright spots with dynamic growth and leading in economic connectivity.

The Deputy PM stressed that the important achievements in socio-economic development, international integration and external relations have changed the picture in Vietnam, remarkably improved the quality of life for its people and further enhanced the country’s position on the international arena.

He expressed thanks to the Governments and people of countries and international organisations for their valuable help and effective cooperation with Vietnam, along with the wish to continue to receive more support from them to intensify multifaceted, constructive and trustful cooperation.

Noting that Vietnam is serving as Chair of the Association of Southeast Asian Nations (ASEAN), Chair of the 41st General Assembly of ASEAN Inter-Parliamentary Assembly (AIPA 41) and a non-permanent member of the UN Security Ccouncil in 2020, Deputy PM Minh said in order to fulfill those heavy tasks, Vietnam will work together with friends and partners, with focus on some major priorities such as further promoting the central role of the UN, upholding multilateralism and international law, promoting trade liberalization and economic integration and connectivity, and contributing more to the handling of regional and global challenges. Vietnam will also strive toward realizing the theme for the ASEAN Year 2020 “Cohesive and Responsive”  while intensifying the process of building a united and strong ASEAN Community that will continue to play a central role and make important contribution to peace, security and development in the world.

The head of the foreign diplomatic corps, Palestinian Ambassador Saadi Salama congratulated Vietnam over the achievements that it has made in 2019. He expressed his belief that with its resolve and capacity as well as the policy of peaceful diplomacy and constructive spirit, Vietnam will well perform the important roles as Chair of ASEAN 2020, Chair of AIPA 41 and a non-permanent member of the UN Security Council.

The ambassador said those roles also provide opportunities for Vietnam to contribute an important voice to promoting adherence to the UN Charter and international law and maintaining peace and security in the world.

Chairman of Hanoi People’s Committee Nguyen Duc Chung thanks the diplomatic corps for their friendship and support for Hanoi. He expressed the wish to receive more cooperation and help of the diplomatic corps so that Hanoi will realize its goal of building a peaceful, green, civilized and moder capital city./.