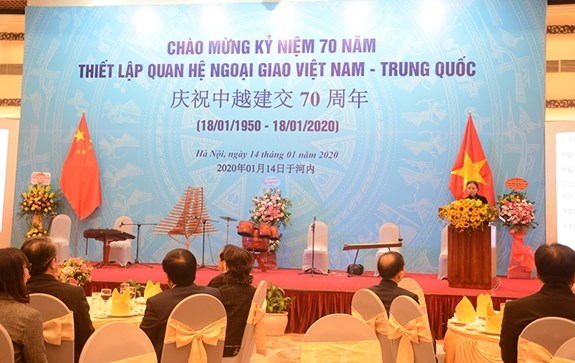 At the reception (Photo: qdnd.vn)

Hanoi (VNA) – The Vietnam Union of Friendship Organisations (VUFO) and the
Vietnam-China Friendship Association (VCFA) on January 14 co-hosted a reception
on the occasion of the 70th anniversary of the two countries’
diplomatic ties (January 18).

In her remarks at the event, VUFO President Nguyen Phuong Nga reviewed the 70-year history and the major achievements of the relationship, which, she said, are attributable to contributions of generations of Vietnamese and Chinese leaders and people.

Therefore, it is the responsibility of both sides to preserve and promote these achievements, she said.

Nga highlighted that the enhancement of cooperation between the two Parties, States and peoples, and the maintenance the Vietnam-China relationship in a healthy and stable way, is an important factor to peace, stability and development of each country as well as of the region and the world at large, given the complex development of regional and international situation.

The Vietnamese Party, State and people always attach importance to developing the comprehensive strategic cooperative partnership between Vietnam and China, considering this a top priority in Vietnam’s foreign policy, the official said.

She underlined the role of people-to-people exchange in materialising common perception reached by high-ranking leaders of the two countries, enhancing mutual understanding and trust, and consolidating the social foundation for the development of the Vietnam-China relationship.

Nga expressed her hope for further coordination with Chinese partners in organising people-to-people exchanges to mark the 70th anniversary of the diplomatic ties.

Chinese Ambassador Xiong Bo emphasized that good relations between Vietnamese and Chinese people are the root and source of strength of the bilateral ties.

He applauded the contributions of the VUFO and the VCFA to intensifying mutual understanding and friendship between people of the two countries.

The ambassador echoed Nga’s view on closer coordination in organising friendship activities to celebrate the 70th anniversary of the bilateral diplomatic ties, such as the China-Vietnam People’s Forum and the China-Vietnam Youth Friendship Meeting.

The Chinese Embassy in Vietnam stands ready to strengthen cooperation with the VUFO and the VCFA, contributing to enhancing understanding and friendship between Vietnamese and Chinese people, and promoting the relationship between the two countries in a stable, healthy and sustainable manner, he said./.