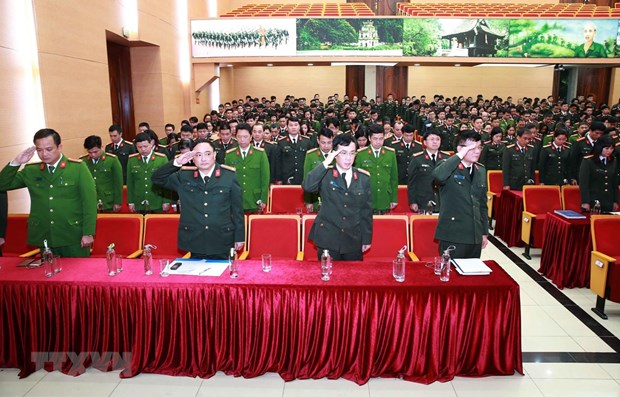 Officers held a minute’s silence for the three officers who died while performing their duty during the disturbance incident in Dong Tam commune, Hanoi’s My Duc district. (Photo: VNA)

Hanoi (VNA) – The Ministry of Public Security held a ceremony on January 14 to call
on the entire public security force to follow the example of bravery set by the
three officers who died while performing their duty during the disturbance incident
in Dong Tam commune, Hanoi’s My Duc district.

He said the security situation in Dong Tam worsened after the Government Inspectorate announced the review of inspections of the land dispute in the commune conducted by Hanoi inspection agency in July 2019.  A number of people gathered in a so-called “consensus group” led by Le Dinh Kinh and his accomplices to protest the result of the inspections.

In early November 2019, the People’s Committee of My Duc district paid out compensations to 14 households who had land to be cleared in Mieu Mon airport. All the 14 households agreed to move out of the defence land area, but members of the so-called “consensus group” stopped the households from moving away, despite the fact that those members did not have land inside the area to be cleared.

After the dialogue, the group of protesters made plans to kidnap officials and set fire and explosion at the People’s Committee headquarters and the petrol station in Dong Tam commune in order to attract attention.

Discovering their intention, the Hanoi police prepared schemes to ensure security and social order, which were approved by the Hanoi People’s Committee and the Ministry of Public Security.

On December 31, 2019, the Defence Ministry started the construction of walls around the section of Mieu Mon airport in three communes of My Duc and Chuong My districts. The construction met with opposition of extremists in Hoanh village, Dong Tam commune.

In such a situation, Hanoi police coordinated with the Ministry of Public Security to set up positions to ensure safety for the communal People’s Committee headquarters and officials of the commune as well as other important areas.

According to Deputy Minister Quang, when the public security force was setting up positions at the entrance of Hoanh village, around 20 elements attacked the force using grenades, petrol bombs and other weapons. The public security force talked to them via loudspeakers, telling them to stop. But the attackers continued with their acts and then withdrew into the houses of Le Dinh Chuc, Le Dinh Hoi and Le Dinh Kinh.

The security force chased the attackers to arrest them, and during the process, three officers – Colonel Nguyen Huy Thinh, Captain Pham Cong Huy and Sen. Lt. Duong Duc Hoang Quan – fell into a 4m-deep hole behind the houses of Le Dinh Hoi and Le Dinh Chuc. The attackers poured petrol and threw petrol bombs into the hole and set fire, killing the officers.

In such a situation, there was no other choice than to open fire, Deputy Minister Quang said, adding that after half an hour, the public security force arrested more than 30 elements and seized weapons and explosives at the scene. During the process of the arrests, Le Dinh Kinh died and his son Le Dinh Chuc was injured, Quang said, adding that when the security force entered his house, Kinh was still holding a grenade in his hand.

Based on collected evidence, the Hanoi police issued a decision on January 13 to start legal proceedings against 22 people involved in the very serious incident in Dong Tam on the charges of murdering, resisting on-duty officials and illegally storing weapons.

According to Quang, collected evidence showed some hostile organisations and elements guided the so-called “consensus group” in making petrol bombs and buying materials to make weapons. Some people, who called themselves representatives for Dong Tam people, raised money for them. Half of the raised money went to Kinh and his family members.

Deputy Minister Quang affirmed that the disturbance happened when the functional forces were building protective walls around the airport.

Deputy Minister of Public Security Le Quy Vuong said the death of the three officers during the disturbance is a great loss to the public security force and their families.

The State President signed a decision to grant the Feat of Arms Order, first class, and the Prime Minister conferred the certificate of national merit to the three officers posthumously. The Minister of Public Security also granted promotion to the officers./.