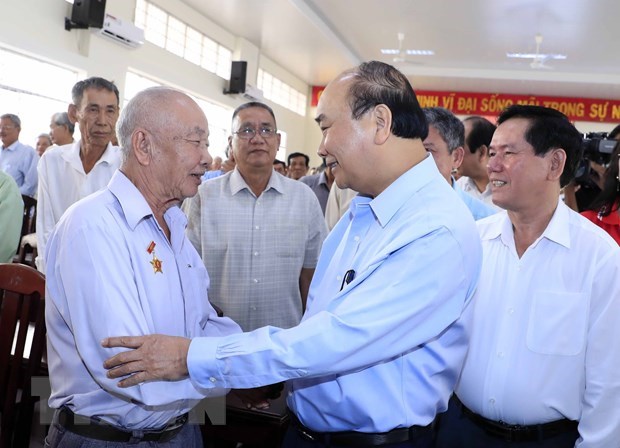 The PM was reported that Tra Vinh has organised many delegations to visit and hand over gifts to poor and near-poor households on the occasion of Tet – the country’s biggest festival.

The government leader expressed his hope that workers will improve their scientific-technological knowledge and professional skills in order to raise productivity and income.

During his trip to Tra Vinh, PM Phuc visited and extended New Year greetings to the executive board of the provincial Buddhist Sangha at Luong Xuyen pagoda.

Later the same day, the PM had a working session with Tra Vinh’s leaders, where he lauded the province’s plan to organise an investment promotion conference on January 15.

Tra Vinh is one of the provinces and cities posting the highest growth rate nationwide, and one of the localities in the Mekong Delta taking the lead in budget collection. Thanks to efforts in coping with saltwater intrusion, the province has reduced losses caused by the phenomenon to the farming sector.

However, Tra Vinh has remained poor, he said, adding that its budget collection of nearly 13.7 trillion VND (589.96 million USD) has met only half of the demand and the local infrastructure system has faced many problems.

According to provincial officials, last year, apart from climate change, unfavourable weather conditions and diseases in the husbandry sector, Tra Vinh had to cope with falling agricultural product prices, unemployment and the complex development of rural security, among others.

However, with continuous efforts, the province’s gross regional domestic product grew 14.85 percent and per capita income stood at about 60 million VND last year. The number of poor households also contracted 2.62 percent to 9,214 households./.