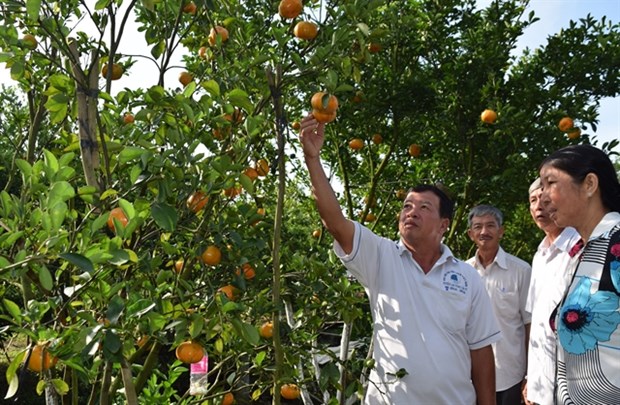 Huynh Van Ton, deputy head of the district’s Bureau of Agriculture and Rural Development, said the output of the district’s pink mandarin had declined dramatically to about 3,500-4,000 tonnes because of the impact of yellow leaf and root rot disease on citrus.

Only 190ha out of the district’s 802ha of pink mandarin can produce fruit now, with an average yield of 20 tonnes per hectare, he said.

However, the quality of pink mandarin for the coming Tet is good.

Lai Vung, which is the largest pink mandarin producer in the Mekong Delta, is well known for the fruit which is used on most family altars in the south during Tet.

It takes about 30 months to grow an ornamental pink mandarin pot.

In the district, pink mandarin trees are cultivated mostly in Vinh Thoi, Tan Thanh, Tan Phuoc and Long Hau communes because of the area’s soil.

He is using every technique that he knows to treat the disease to revive his orchard for the next crop.

Many farmers are also struggling to recover their orchards from disease which has occurred in the district in recent years and has not been treated thoroughly.

Nguyen Van Sua has used many techniques to treat the disease for his 5,000 sq.m pink mandarin orchard in Long Hau commune, but has not been successful.

“My orchard has had almost no harvests for Tet in the past two years,” he said.

The bureau is helping farmers find solutions to recover their pink mandarin orchards. It has been working with agencies and scientists on techniques that can prevent disease on citrus fruits./.