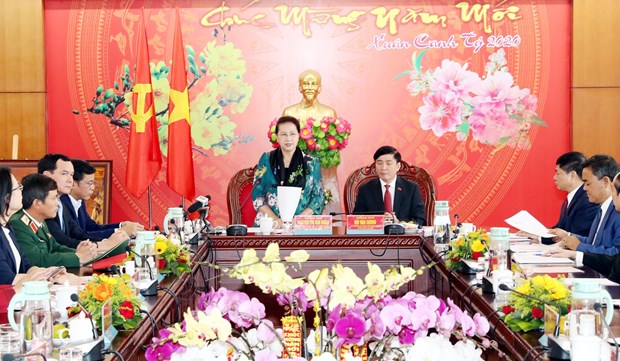 Dak Lak (VNA) – Chairwoman of the
National Assembly Nguyen Thi Kim Ngan had a working session with the provincial
Party Committee’s Standing Board of the Central Highlands province of Dak Lak
on January 14.

Positive outcomes were also seen in building new-style rural areas, she said, citing 52 communes in the province have met all criteria of the programme.

Though Dak Lak has the fourth largest natural area in the country with 49 ethnic groups living together, the local state budget collection in 2019 stood at only 7.37 trillion VND (317.5 million USD), showing the province has faced a lot of difficulties, the top legislator said.

She asked the province to implement the Politburo’s conclusion on building and developing Buon Ma Thuot city and Dak Lak province through 2030, with a vision to 2045, and the National Assembly’s resolution approving a project on overall socio-economic development of ethnic minority and mountainous regions in 2021-2030.

The NA Chairwoman emphasised the task to ensure defence and security as the Central Highlands has an important strategic location.

During her working visit to Dak Lak, Ngan visited workers, police officers, and border guards in the province on the occasion of the upcoming traditional Lunar New Year (Tet), the biggest holiday in Vietnam.

She presented 100 gift packages worth 1.2 million VND each to local poor workers./.