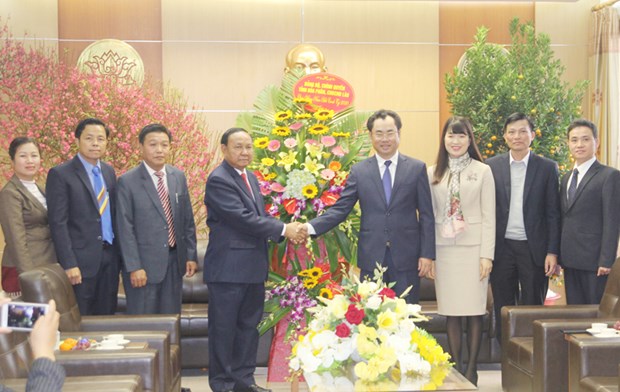 At the meeting (Photo: baothainguyen.vn)

Thai Nguyen (VNA) – A
delegation from the Lao province of Houaphane, led by Deputy Secretary of the
provincial Party Committee and Chairman of the provincial People’s Council Vonboun
Thavong visited the northern province of Thai Nguyen ahead of the Lunar New
Year (Tet) festival.

Trinh Viet Hung, Vice Chairman of the Thai Nguyen People’s Committee, briefed the guests on marked achievements the province recorded in economy, social affairs, security and external affairs in 2019, as well as its preparations for all-level Party congresses, towards the 20th provincial Party Congress.

He also reviewed the friendship between Vietnam and Laos, and the two provinces in particular.

For his part, Vounbun Thavong told his host that Houaphane’s Party Organisation, administration and people joined hands to overcome huge impacts of natural disasters in 2019 and stabilise their lives.

The official expressed his hope for a close-knit, ever-growing relationship between the two provinces.

During their stay in Thai Nguyen, the delegation visited a memorial house dedicated to martyrs of Company 915 in Gia Sang ward, Thai Nguyen city, and an exhibition space featuring youth volunteers./.