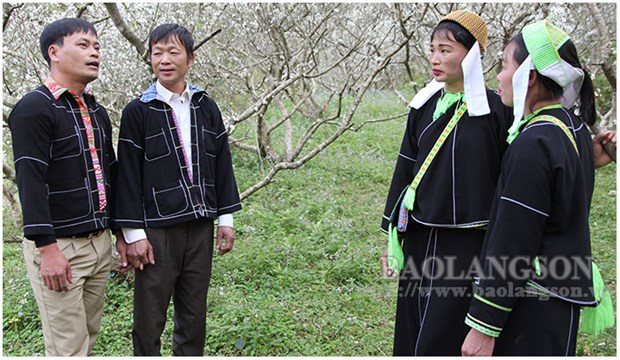 Hanoi (VNA) – As peach blossoms flaunt their deep pink colour on the threshold of spring, the melodies of folk music are everywhere in all the hamlets in the northern province of Lang Son, which have become an indispensible part in the spiritual life of locals.

Researcher Hoang Huy Am, Vice President of the provincial association of folk music preservation said performances of folk music and songs are a community-based cultural activity. In their traditional costumes, local people sing in their own languages, which is unique and helps popularise the tongues, thus encouraging visitors to seek meaningful and beautiful traits in the ethnic group’s spiritual life.

For example, the Tay people has a gourd lute called “dan tinh”, as well as “then”, “luon”, “vi” and “phong slu” singing melodies, while their Nung brothers and sisters have “sli” and “heo phun” singing.

“Pao dung” is a popular melody of the Dao people, and love duet singing of Mong people is divided into two main parts. Romance-themed folk songs of the San Chay people in Lang Son are called “sang co” or “piac nhat co”, while those of the Hoa people in the province are named “shan co” (Son ca singing).

Folk music of the groups together creates a unique folk culture of Lang Son province. However, those melodies are not immune from outer influence and oblivion risks.

Therefore, authorities of all levels in the locality have launched taken various measures to bolster research and collection of the melodies and systemise data on folk songs of the groups. The culture, sports and tourism sector of the province has reviewed intangible heritage in the locality since 2011.
In addition, various practical activities have been carried out, such as honouring local artisans, devising policies to support and maintain “then” singing clubs, and teaching folk melodies to the next generations. Since 2016, the provincial Department of Culture, Sports and Tourism has opened 10 classes on “sli”, “then”, and “pao dung” singing, which attracted more than 3,000 learners.

The success of the preservation of intangible cultural heritages is attributed to the work by associations, notably the provincial

Thanks to such effort, old folk singing genres such as “then”, “sli”, “pao dung” and “xang co” have come back to the community. Since 2017, “then” and “sli” singing by Tay and Nung ethnic groups have been recognised as national intangible cultural heritages.

In particular in June last year, three locals were awarded with the title of People’s Artist and 18 other as Meritorious Artist in the intangible cultural field by the President.

In late 2019, the practice of the “then” singing by Tay, Nung and Thai ethnic people was recognised as Intangible Cultural Heritage of Humanity by the UNESCO. Deputy Director of the provincial Department of Culture, Sports and Tourism Phan Van Hoa said the department will continue reviewing the folk singing situation in the locality, thereby building a plan for preservation. It will also hold folk singing competitions and festivals and pool social resources in the effort, he added./.