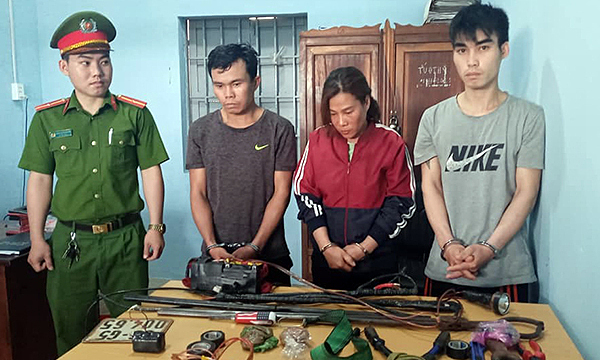 Nguyen Van No, Tran Thi Nguyet and Nguyen Dinh Thao at a police station in Dak Nong Province, January 12, 2020. Photo courtesy of the the Ministry of Public Security Newspaper.

Three people have been arrested in Dak Nong Province for allegedly stealing dogs weighing a total of around 14 tons over a year.

Tran Thi Nguyet, 46, struck a deal with Nguyen Dinh Thao, 28, and Nguyen Van No, 38, to buy dogs they steal for VND40,000 ($1.7) per kilogram, police in the Central Highlands province said on Tuesday. Nguyet supplied the dogs to local restaurants.

No and Thao were arrested after they stole seven dogs and brought them to Nguyet last Sunday.

The police also seized from them 55 kg of dog meat, tapes, a taser, and a motorbike.

Nguyet has reportedly bought around 14 tons worth of dogs from the duo since last year. If an average dog weighed 15 kg, almost 1,000 dogs passed through their hands.

No and Thao stole five to seven animals every night, the police said.

Many of the dogs that make it to the frying pan are stolen pets sold to small, unregulated abattoirs and killed in brutal ways.

Dog theft is treated as a crime only when a canine is valued at more than VND2 million ($86). There’s no law against trading dog meat.