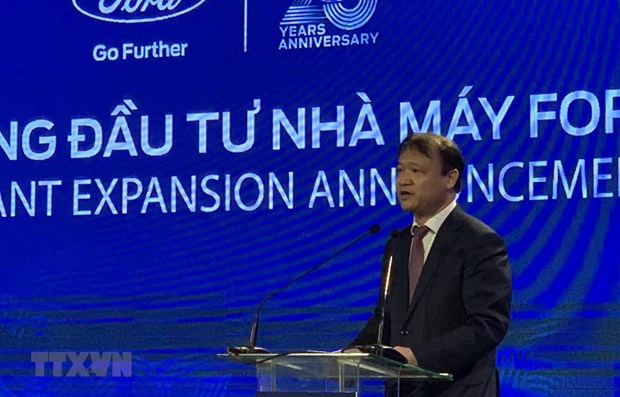 Deputy Minister of Industry and Trade Do Thang Hai speaks at the announcement ceremony. (Photo: VNA)

Hanoi (VNA) – Ford Vietnam has
announced an additional investment of 82 million USD (over 1.9 trillion VND) to
expand its automobile factory in the northern province of Hai Duong.

The expansion is expected to increase the plant’s production capacity from 14,000 cars at present to 40,000 per year.

Speaking at the announcement ceremony in Hai Duong on January 14, Ford Vietnam General Director Pham Van Dung said the decision was made based on the growing demand for Ford cars and optimistic forecasts for the development of Vietnam’s auto market.

Deputy Minister of Industry and Trade Do Thang Hai said the expansion has significant meaning in implementing the development strategy of the Vietnam’s auto industry through 2025, with a vision to 2035.

He asked the People’s Committee of Hai Duong province to create the best conditions for Ford to develop in line with the strategy.

The expansion project will be divided into two phases and carried out from 2020. It is scheduled for completion in mid-2022.

The project is expected to create 500 more jobs at the plant and thousands of other jobs at Ford’s agent network nationwide./.