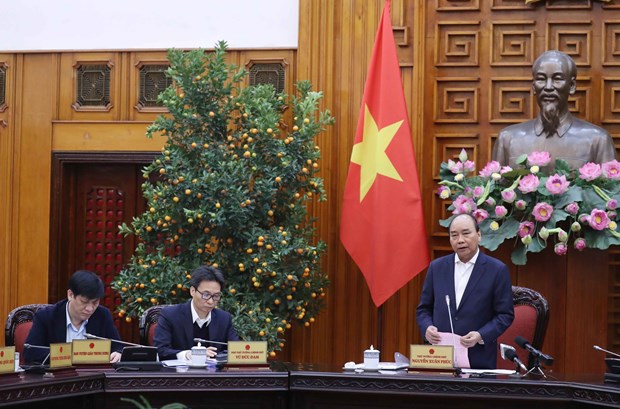 Hanoi (VNA) – In the face of complex
developments of the acute respiratory disease caused by the novel coronavirus (nCoV),
Prime Minister Nguyen Xuan Phuc chaired an urgent meeting with officials of
relevant ministries and sectors in Hanoi on January 27 to discuss
countermeasures.

The Government leader pointed out that Vietnam faces high risks of being affected by this dangerous and rapidly spreading disease, against which there hasn’t been a vaccine, since it is a popular destination of Chinese tourists and shares a long borderline with China.

He requested that relevant agencies, sectors and localities must not be subjective or underestimate the disease so as to ensure the ultimate goal of protecting people’s health and lives, curb the virus from spreading on a large scale, and minimise deaths from this disease. He told them to prevent fears in the public as well as discrimination against patients or people of foreign nationalities.

“Fighting the nCoV-caused disease is like fighting an enemy,” PM Phuc said, urging the political system across the 63 provincial-level localities to promptly take actions.

He also ordered effective prevention of disease transmission via tourism activities and air, waterway and road transportation, adding that international points of entry must be equipped with thermal scanners. Besides, the Ministry of Health needs to publicise the medical establishments providing treatment of this disease to minimise the movement of patients to reduce infection risks.

Describing stronger communications to raise public awareness as a top priority, the PM noted a national steering committee chaired by Deputy PM Vu Duc Dam will be set up to cope with the nCoV disease.

“The Government accepts economic losses to protect the lives and health of people,” he stressed.

The leader also asked the Foreign Ministry to coordinate with the Ministry of Labour, Invalids and Social Affairs to review the number of Chinese working in Vietnam to take necessary measures to guarantee the public’s health.

According to the Ministry of Health, there have been almost 2,800 nCoV-infected cases around the world, including 80 deaths all of whom are in Wuhan city of China’s Hubei province. China alone has recorded 2,747 cases in 30 provinces and cities. Fifteen other countries and territories have reported 50 patients of the disease.

In Vietnam, there have been 63 cases who showed fever symptoms and returned from nCoV-affected areas. They consist of 25 negative for the virus and 38 still kept in quarantine, including the two Chinese nationals initially tested positive for nCoV at the Cho Ray Hospital in Ho Chi Minh City.

Deputy Minister of Transport Le Anh Tuan said as directed by his ministry, Vietjet Air conducted four flights carrying Wuhan passengers from Vietnam back to Wuhan international airport. None of them showed signs of nCoV infection./.