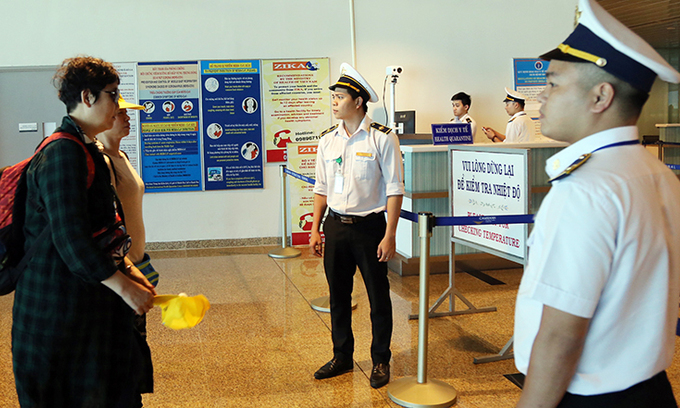 Hospital director Dr. Nguyen Dong said Sunday the Chinese patients were sent to the hospital Saturday and Sunday after body temperature screening at the Cam Ranh International Airport. The Vietnamese patients are from Cam Lam District in the central province of Khanh Hoa.

“The hospital has quarantined, placed them under observation and sent their blood samples to the Nha Trang Pasteur Institute to determine whether their fever was caused by coronavirus,” he said.

Many people with signs of fever and worry about the nCoV virus have come to the hospital for examination, Dong added.

Khanh Hoa, home to Nha Trang Bay – one of the most popular tourist destinations in Vietnam, has not recorded any case of pneumonia caused by the nCoV virus thus far.

As part of measures to stop the spreading of the virus, flights from China’s Wuhan City (where the virus originated) to Cam Ranh International Airport have been suspended since January 24.

Over the past three days, flights departing from the Cam Ranh International Airport have mainly taken passengers from Khanh Hoa to Wuhan.

Nguyen Hoa Hoi, director of Khanh Hoa’s international health quarantine center, said that the local health authorities were coordinating with competent agencies to prevent pneumonia caused by nCoV from spreading in the region.

The airport has been equipped with five screening devices at entry and exit areas to measure the body temperatures of passengers. Eight health workers are on duty 24 hours to detect signs of fever and hospitalize those found with above normal temperatures.

As of January 27 morning, there were more than 2,510 cases of nCoV infection recorded worldwide. China declared it has had 80 deaths caused by the virus.