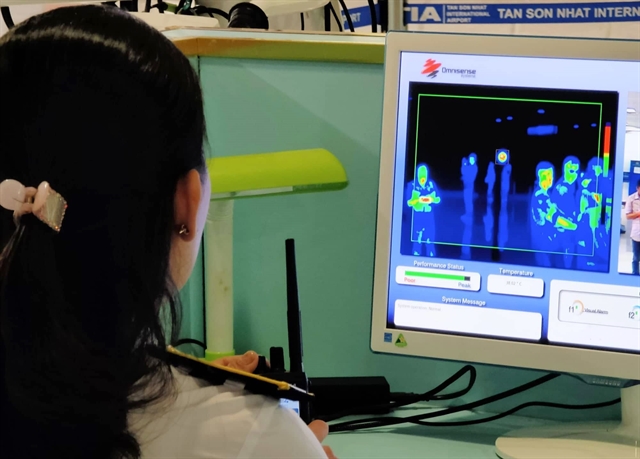 ĐÀ NẴNG — Twelve patients are currently in quarantine at Đà Nẵng General Hospital with fever, including seven Chinese nationals, four Vietnamese and one from the Czech Republic, as the novel coronavirus outbreak continues to spread worldwide.

Nguyễn Thành Trung, deputy director of the hospital, said that among the 12, one from China’s Hunan Province was detected by a thermal scanner at Đà Nẵng International Airport as having a body temperature above 38.5oC and was promptly rushed to the hospital.

The remaining cases are tourists or Vietnamese people who went to private hospitals in the city as they all suffered from high fevers and claimed to have been in contact with Chinese nationals, according to Vietnam News Agency.

However, there is not enough evidence to establish their condition is linked to the fast-spreading and deadly coronavirus, Trung said, adding that all of these cases were transferred to the General Hospital to be monitored and treated as per protocol.

Clinical samples have been collected from the patients and sent to Nha Trang for further analysis.

In case any one of the patients develops or starts to show symptoms of pneumonia they will be immediately moved into highly quarantined sections, Trung said.

Thanh Hoá Province in central Việt Nam also said on Sunday it is quarantining and monitoring the health status of a Vietnamese citizen with symptoms of pneumonia – high fever, chest pains and coughing – after their return from China’s Wuhan City, the epicentre of the coronavirus outbreak, seven days ago for a Tết (Lunar New Year) visit.

It is currently not yet verified whether the patient had contracted the virus.

Đà Nẵng’s health department on Sunday also announced that the death of a Chinese citizen on Saturday in the city was not caused by the dreaded virus but a heart attack, allaying fears among the increasingly anxious public as reports of mounting infection cases and deaths keep pouring in from all over the world.

According to the department, a 66-year-old Chinese woman named Liyan arrived in Đà Nẵng late Thursday on Vietjet Air flight number VJ8859 and stayed in a hotel in Ngũ Hành Sơn District.

During her three-day stay, the woman showed no symptoms of pneumonia. Her relatives said that late Friday, she felt tired and returned to her room to rest.

She later fell into a coma and was brought to the private Hoàn Mỹ Hospital where she passed away, with the cause of death confirmed by both the hospital’s doctors and the city’s disease control and prevention centre to be myocardial infarction.

The central city’s health department said that so far, all 236 passengers onboard the same flight as the Chinese national are still in good health and displaying no symptoms of respiratory issues, including fever and coughing.

The department said it has sent recommendations to all hotels in the city to inform their customers of the disease and the symptoms to look out for.

This afternoon, an image of medical workers in full hazmat suits escorting a Chinese national, reportedly with fever, into an emergency vehicle in a busy downtown street in HCM City street also sent social media into a frenzy as the public feared that the outbreak might be spiralling out of a control.

However, the doctors at the Hospital for Tropical Diseases’ Department of Infectious Diseases have confirmed to Tuổi trẻ newspaper that the patient is not suffering from fever, and the emergency medical service merely responded to a worried call from the patient’s relatives.

The doctors said that the patient is no longer quarantined and has been moved to another department in the hospital for treatment.

The southern city’s emergency medical service 115 said they are currently on high alert and they would immediately carry out all necessary protocols against suspicious cases even when links to the virus are not yet certain. — VNS

Vietjet Air gets exceptional permission to fly Chinese back to Wuhan

The Deputy Minister affirmed that this is only an exception as the CAAV had ordered the cancellation of all flight permits and suspension of new permit granting for all flights, both regular and non-regular ones, between Việt Nam and Wuhan city, Hubei province.

He noted that the flights operated by Vietjet only carried Wuhan passengers back to China and the return flights were without any passengers, adding that all crewmembers on those flights had to undergo health check-ups, and aircraft were sterilised in line with regulations.

Việt Nam Airlines and Jetstar Pacific have also confirmed that they operate no direct flights to and from Wuhan at present.

The two carriers will refund tickets or change flights for free for passengers who have been booked on flights to and from Chinese cities since January 24 till new announcements are made.