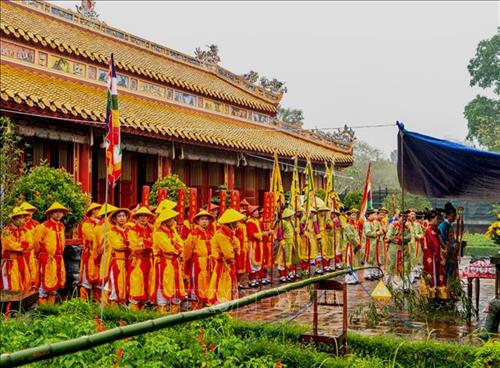 A ritual ceremony erecting the Cây Nêu (bamboo pole) will be held at Triệu Miếu, Thế Miếu shries and Long An palace in Huế Imperial Citadel on January 17 or the 23rd day of the last lunar month to announce the arrival of Tết. VNA/VNS Photo Quốc Việt

A ritual ceremony erecting the Cây Nêu (bamboo pole) will be held at Triệu Miếu and Thế Miếu temples and Long An Palace on January 17 or the 23rd day of the last lunar month to announce the arrival of Tết, according to the Huế Monuments Conservation Centre.

The “Ancient fragrance of Tết cakes” programme, which features chưng and tét glutinous rice cakes making competitions, is set for January 18. Meanwhile, the flag tower will be lit up and cannons will be fired on Lunar New Year’s Eve, which this year falls on January 24.

The centre will offer free entry to its monuments from January 25-27, giving locals and tourists access to the former royal city. Visitors will have a chance to watch the Changing of Guards rituals at Ngọ Môn Gate, dragon dances, performances of nhã nhạc (Huế royal court music), royal games and calligraphy at Thái Hòa Palace’s courtyard.

On the last day of Tết, the bamboo pole will be taken down, ending the holiday. The same day, Thế Miếu Temple and Long An Palace will host the khai ấn (opening royal seal) ceremony to start a new year.

In recent years, Huế has emerged in the Vietnamese tourism map as a heritage destination where traditional rituals and the culture of the Nguyễn Dynasty (1802-1945) have been preserved.

The Huế Imperial Citadel was recognised as a World Cultural Heritage Site by UNESCO in 1993.

In 2020, the province’s tourism sector hopes to welcome 5-5.2 million visitors, 40-45 per cent of them foreigners. Total tourism revenue is expected at some VNĐ12 trillion (US$518.7 million). VNS