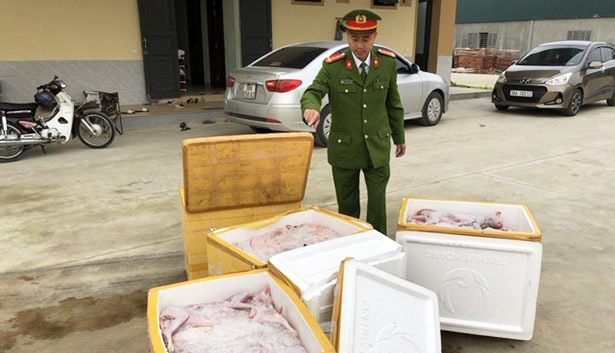 Police in central Vietnam have seized 600 kilos of frozen cat carcasses from a passenger bus traveling from the south to the north.

The carcasses were stored in ice in six styrofoam boxes.

The seizure was made in Ky Anh Town, Ha Tinh Province Monday night after traffic police stopped the bus, that had departed from Kien Giang Province and was on its way to Thai Binh Province.

Nguyen Van Dinh, owner of the bus that was carrying around 40 passengers, and its driver, Dang Van Duong, failed to submit any receipt or paper for the origin of the carcasses, police said Tuesday.

Duong told the police that when the bus arrived in Dong Thap Province in the Mekong Delta Monday evening, he was hired by a passer-by to carry the boxes to Thai Binh, and was told that someone will contact him to receive the package upon his arrival.

He said he had no idea what was in those boxes, while Dinh said he was aware that they were cat carcasses, according to a report in a Ha Tinh newspaper.

The Department of Animal Husbandry and Veterinary of Ha Tinh has suggested that the cat carcasses are disposed off. If an average cat weighed five kilograms, there were 120 cats on the bus.

The owner of the bus and the driver have been detained in the central province for further investigation.

Under current laws, they will be investigated for “transporting goods of unknown origin.” There are no laws related to killing, selling and eating of cat and dog meat in Vietnam.

Despite authorities trying to dissuade people from eating cat meat, many are not persuaded.

Restaurants have even used cat meat imported from China because of the thin local supply.