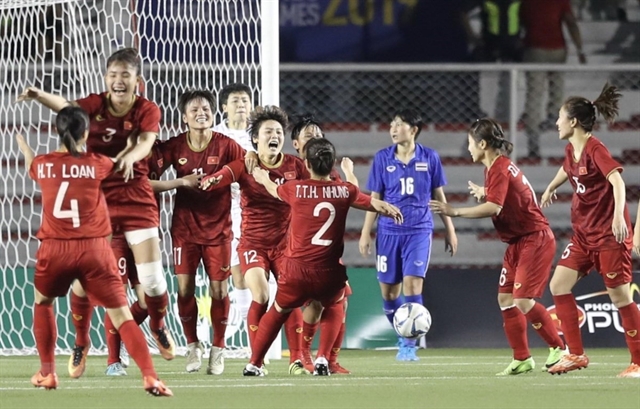 Vietnamese players celebrate the only goal in their 1-0 win over Thailand in the final of the SEA Games women’s football tournament. — VNA/VNS Photo

Yến, who came from the bench in the second half, headed straight to the net from a close range in a match that saw Việt Nam beat arch-rival Thailand 1-0 to be lift the gold medal at the biennial tournament.

There was little between the two sides, with both registering the same amount of shots, nine in total each with six on target.

Thailand thought they had taken the lead not long after the break but Taneekarn Dangda had strayed into an offside position before heading home.

With both sides going toe–to-toe, and cancelling each other out time and time again, it was inevitable this match would need extra time to decide the winner.

Just one minute into the added time, midfielder Nguyễn Thị Tuyết Dung struck a free kick from the left hand side and after a mix-up in the box, the ball fell to Yến who nodded home past Boonsing Waraporn in Thailand’s goal.

It may have been Yến’s first goal of the SEA Games, but it was by far the most important she will ever score.

And to top off a perfect night, the victory puts Việt Nam ahead of their bitter rivals as this was their sixth tournament win, one more than Thailand.

The win will also bring the national team nearly VNĐ2 billion (US$87,000) of bonus from the local federation and enterprises.

In the third-place playoff, Myanmar defeated the Philippines 2-1 to take the bronze medal. — VNS